Round Top, Texas facts for kids

Round Top is a town in Fayette County, Texas, United States. The population was 90 at the 2010 census.

As a part of the Stephen F. Austin colony, James Winn acquired 4,428 acres (17.9 km2; 6.9 sq mi) in 1831; the present townsite was included in this tract. The community was originally known as "Townsend", after early settler Nathaniel Townsend (whose original house still exists as the Texana Lodge). Later the town was renamed "Round Top", since the postmaster lived in a house with a round tower. Portions of Nassau Plantation were purchased by the Adelsverein, and settlement by German immigrants began 1845 to 1847; these settlers began buying up the local farms and the town lots.

Joel Walter Robison, a fighter in the Texas Revolution and later a member of the Texas House of Representatives from Fayette County, was originally buried at the Florida Chapel Cemetery near Round Top but was re-interred in 1932 in the Texas State Cemetery in Austin.

According to the United States Census Bureau, the town of Round Top has a total area of 0.97 square miles (2.5 km2), all of it land.

There were 43 households, out of which 9.3% had children under the age of 18 living with them, 46.5% were married couples living together, 4.7% had a female householder with no husband present, and 48.8% were non-families. 44.2% of all households were made up of individuals, and 37.2% had someone living alone who was 65 years of age or older. The average household size was 1.79 and the average family size was 2.41. 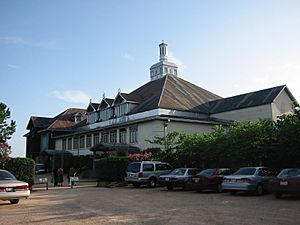 Round Top is the home of three visitor-drawing programs:

Round Top is the home of the oldest building in Fayette County, Moore's Fort, which was moved there from nearby La Grange.

The town is served by the Round Top-Carmine Independent School District.

All content from Kiddle encyclopedia articles (including the article images and facts) can be freely used under Attribution-ShareAlike license, unless stated otherwise. Cite this article:
Round Top, Texas Facts for Kids. Kiddle Encyclopedia.