La Grange was the site of an early crossing of the Colorado River along La Bahía (Lower Road) of the El Camino Real (Kings Highway), during the Spanish period. The earliest Anglo-American settlers in the area were Aylett C. Buckner and Peter Powell, who lived slightly to the west. The first Anglo-American settlement on the city's present location was by Stephen F. Austin's band of colonists in 1822. John Henry Moore built a blockhouse in 1828 (some sources cite 1826) as protection from the Comanche. The building is known as Moore's Fort and can be found today in nearby Round Top, having been moved there for restoration.

By 1831 a small community had developed around Moore's Fort. The town of La Grange was platted in 1837, during the Republic of Texas period, as the county seat for the then-new county of Fayette. Both of these place names were in honor of the Marquis de Lafayette, who fought with the Americans and aided the cause of the American Revolution; he died in 1834. Lafayette's castle in France for which La Grange was named is the Château de la Grange-Bléneau. 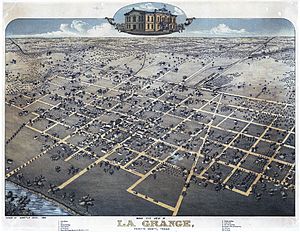 In the immigration wave of Germans after the revolutions of 1848, the town was a major site of German settlement; newcomers said (like the Czechs who followed them) that the rolling hills and forests were reminiscent of their homelands. In the 21st century, the German and Czech influences on the town are still visible in many local customs, the architecture, and the town's reputation for rejecting prohibition of alcoholic beverages during the 1920s and 1930s - beyond a token effort by the local authorities. German and Czech culture had a more social tradition around drinking. La Grange became the home of many Jewish immigrants in the late 19th century, who entered the region through the port of Galveston.

La Grange has a number of properties listed on the National Register of Historic Places. The town was the departure point for the Mier Expedition, known for the Black Bean Episode. Team members had gathered at an historic oak that is a local landmark. The tree survives, although it was damaged from being hit by the car of a drunk driver. The tree has a concrete support for stability.

After independence, Texas continued to have armed confrontations with Mexican forces over control of the territory between the Rio Grande and the Nueces River. In what is known as the 1842 Dawson Massacre, numerous Texas militia were killed by Mexican forces near San Antonio. Several years later, the remains of those dead and of those from the black bean death lottery (Mier Expedition), were exhumed and reinterred in La Grange in a large common tomb with a sandstone vault. This took place in a ceremony on September 18, 1848, at the location now known as Monument Hill; more than 1,000 people attended, including former president of the Republic of Texas, Sam Houston.

On January 17, 1849, Heinrich Ludwig Kreische, a recent German immigrant, purchased 172 acres (70 ha) of land which included the tomb. He built a three-story house and, in 1860, began building a brewery. By 1879, it was the third-largest brewing operation in Texas, with its flagship product being "Kreische's Bluff Beer". Kreische maintained the tomb for the rest of his life, but the tomb and Kreische Brewery began to deteriorate after his death in 1882. The brewery closed in 1884.

The Kreische family asked the city to remove the tomb from their property, as it was frequently vandalized. On April 15, 1905, the Texas Legislature passed a bill to authorize acquisition, by purchase or condemnation, of the 0.36 acres (0.15 ha) of land occupied by the tomb. The state acquired the land by condemnation on June 24, 1907.

In 1933, during the Great Depression, the State Highway Commission fenced the 0.36 acres and agreed to maintain it as a state park, as one of the infrastructure projects of this period. In the same year, the Daughters of the Republic of Texas purchased a new granite vault for the tomb. For the 1936 Texas Centennial, the Texas Centennial Commission erected a 48-foot (15 m) shellstone monument with an art deco mural to mark the mass grave.

In 1949 the state transferred authority for the site to the Texas Parks and Wildlife Department. In 1956, the citizens of Fayette County purchased 3.54 acres (1.43 ha) around Monument Hill and deeded the land to the state for parkland. Another 36 acres (15 ha), including the Kreische Brewery and the Kreische Home, were added to the park site in 1977. The complete site, called Monument Hill and Kreische Brewery State Historic Sites, opened to the public in 1983, after archaeological studies were completed.

In 1974, a little league team from La Grange won the Texas state championship.

The Texas Czech Heritage and Cultural Center is located at 250 Fair Grounds Road in La Grange. The center constructed a new archives building, aided by a seed donation in 2007 from the estate of Adolph R. Hanslik of Lubbock. Hanslik was known as the "dean of West Texas cotton producers" and was a native of Hallettsville in Lavaca County.

La Grange is located slightly northeast of the center of Fayette County. U.S. Route 77 passes through the center of town as Jefferson Street, leading north 20 miles (32 km) to Giddings and south 16 miles (26 km) to Schulenburg and Interstate 10. Texas State Highway 71 passes through the northern part of La Grange on a bypass, leading southeast 26 miles (42 km) to Columbus and Interstate 10, and northwest 20 miles (32 km) to Smithville. Austin is 64 miles (103 km) northwest via Highway 71, and Houston is 101 miles (163 km) east via Highway 71 and I-10.

According to the United States Census Bureau, the city has a total area of 4.1 square miles (10.7 km2), of which 0.012 square miles (0.03 km2), or 0.25%, is water. The city sits in the valley of the Colorado River, primarily on the northeast side, although the city limits now extend across the river along West Travis Street as far as the Highway 71 bypass.

All content from Kiddle encyclopedia articles (including the article images and facts) can be freely used under Attribution-ShareAlike license, unless stated otherwise. Cite this article:
La Grange, Texas Facts for Kids. Kiddle Encyclopedia.