Giddings is the county seat of Lee County, Texas, United States situated on the intersection of U.S. Highways 77 and 290, 55 miles (89 km) east of Austin. Its population was 5,665 at the 2010 census. The city's motto is "Giddings Texas: Experience Hometown Hospitality".

The land where the city of Giddings now stands was part of the land granted to Richard Franklin Giddens, Stephen F. Austin died for 1821 for a colony in Spanish Texas, and later became part of the Robertson Colony.

The city itself was founded in 1871 when the Houston and Texas Central Railway came to the area. It probably took its name from local magnate Jabez Deming Giddings, who was instrumental in bringing the railway to the area. He had come to the area from Pennsylvania in 1838 to claim the land bounty of his brother Giles A. Giddings, killed at the Battle of San Jacinto. Another theory is that the city was named after Jabez's brother Dewitt Clinton Giddings.

Early settlers in the new town were mostly pioneers from the surrounding communities, such as Old Evergreen and Shady Grove. The majority of these people were ethnic Anglo-Saxons, but a sizeable majority were Wendish families from the Serbin area. They would later establish the German-language newspaper Deutsches Volksblatt.

A syndicate headed by William Marsh Rice owned the whole townsite and sold property to settlers. Later Rice Institute (now Rice University) in Houston had control and sold the lots.

Wide streets were a distinguishing characteristic of the town; the two main thoroughfares (Main and Austin Streets) were 100 feet (30 m) wide, and other streets were eighty feet (24 m) wide. The town's first church, established in 1871, was Methodist. J. D. Giddings Masonic Lodge, chartered in Evergreen in 1865, moved to Giddings, and early churches and a public school met in its building. Soon after the Civil War, freed slaves from farms and plantations settled in Giddings. Classes for more than fifty black students were held in a church in 1883, and the first black public school was built in 1887. 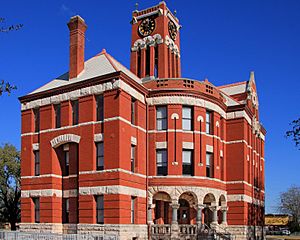 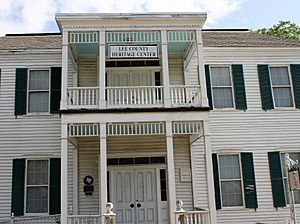 Giddings became the county seat when Lee County was established in 1874. Early businesses included the Granger store, a blacksmith shop and saloon, a millinery shop, a saddle and harness shop, and an oil mill. Brick buildings came in 1875. The courthouse built in 1878 burned and was replaced in 1899. Fletcher House, built in 1879 by August W. Schubert, was sold to the Missouri Synod of the Immanuel Lutheran Church in 1894 to house Concordia Lutheran College. By 1890 the town was part of a rich cotton-growing area with access to the San Antonio and Aransas Pass Railway, several gins, an opera house, newspapers, and a population estimated at 1,000. The First National Bank was opened in 1890 and was still in operation more than a century later. The town was incorporated in 1913 and had a population of 2,000 by 1914.

In the early 1980s the oil-laden Austin chalk that underlies the town was tapped, and the area experienced an oil boom. Some 300 oil-related businesses located in the town, and many oil rigs were operating in outlying areas. In the late 1980s, however, the oil activities decreased almost to a standstill. The population of Giddings in 1988 was 5,178. In 1990 local businesses included a hospital, a medical clinic, a dialysis clinic, a chiropractic clinic, two nursing homes, a library, motels, restaurants, two newspapers, a peanut mill, Invader Boat Manufacturing Company, and Nutrena-Cargill Mills. There were nineteen churches in the city.

First Presbyterian Church of Giddings is located across from the Lee County Heritage Center.

The climate in this area is characterized by relatively high temperatures and evenly distributed precipitation throughout the year. The Köppen Climate System describes the weather as humid subtropical, called Cfa.

There were 1,639 households out of which 38.1% had children under the age of 18 living with them, 52.8% were married couples living together, 11.4% had a female householder with no husband present, and 31.3% were non-families. 27.6% of all households were made up of individuals and 13.5% had someone living alone who was 65 years of age or older. The average household size was 2.74 and the average family size was 3.39.

Giddings at the intersection of U.S. Highways 290 and 77

In 2014, the City of Giddings and the Giddings Economic Development (GEDC) purchased 170 acres of land on the east side of town with highway frontage for the development of the Giddings 290 Business Park. The GEDC broke ground on construction in the spring 2015. The GEDC also expanded its office space to a new location along Hwy 290 in order to increase visibility and to provide more amenities to clients. In 2011, the GEDC completed restoration of the historic train and freight depots. Both facilities are owned by the GEDC and operated by the Chamber of Commerce as a visitors center and museum of agriculture and history. The freight depot houses a display celebrating the city's links with the railroad and serves as a special event facility for community and private gatherings. The downtown paver restoration project remains under development. In 2015, the City, the GEDC, the Chamber and members of the American Legion launched Phase I of the Veterans Memorial Wall Project, with an expected completion by Spring 2017.

The Wendish heritage in Giddings is celebrated annually in nearby Serbin, Texas, put on by the Texas Wendish Heritage Society. It occurs on the fourth Sunday every September.

All content from Kiddle encyclopedia articles (including the article images and facts) can be freely used under Attribution-ShareAlike license, unless stated otherwise. Cite this article:
Giddings, Texas Facts for Kids. Kiddle Encyclopedia.