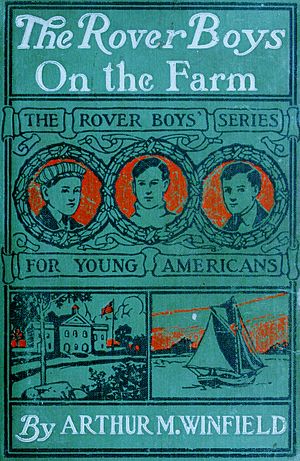 The Rover Boys on the Farm, 1908, first edition cover

The Rover Boys, or The Rover Boys Series for Young Americans, was a popular juvenile series authored by Arthur M. Winfield, a pseudonym for Edward Stratemeyer, and published by Stratemeyer Syndicate. Thirty titles were published between 1899 and 1926 and the books remained in print for years afterward.

The original Rover Boys were brothers Tom, Sam, and Dick Rover. Their children (Fred, son of Sam Rover; Jack, son of Dick; Andy and Randy, twin sons of Tom) became the main characters of the "second series" that began with Volume 21, The Rover Boys at Colby Hall, published in 1917. The elder Rovers continued making appearances in the second series.

Additionally, there was a related Putnam Hall series of six books that featured other characters from the first Rovers series although the Rovers themselves do not appear.

The Rovers were students at a military boarding school: adventurous, prank-playing, flirtatious, and often unchaperoned adolescents who were frequently causing mischief for authorities as well as criminals.

The series often incorporated novel technology of the era, such as the automobile, airplanes (The Rover Boys in the Air) and news events, such as World War I. 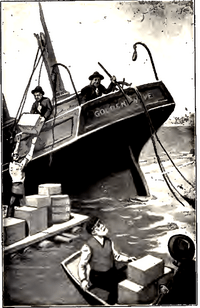 Image appearing on DJVU page 6 (frontispiece) of Rover Boys on Land and Sea. (1903)

Some of these books are available for download free at Project Gutenberg.

All content from Kiddle encyclopedia articles (including the article images and facts) can be freely used under Attribution-ShareAlike license, unless stated otherwise. Cite this article:
Rover Boys Facts for Kids. Kiddle Encyclopedia.