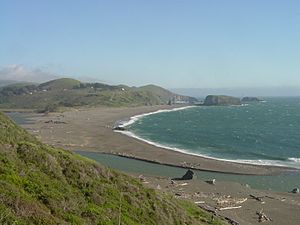 The mouth of the Russian River

The areas are two of the 22 marine protected areas adopted by the California Department of Fish and Wildlife in August 2009, during the second phase of the Marine Life Protection Act Initiative. The MLPAI is a collaborative public process to create a statewide network of protected areas along California’s coastline.

The north central coast's new marine protected areas were designed by local divers, fishermen, conservationists and scientists who comprised the North Central Coast Regional Stakeholder Group. Their job was to design a network of protected areas that would preserve sensitive sea life and habitats while enhancing recreation, study and education opportunities.

Russian River SMRMA includes the waters below the mean high tide line eastward of the mouth of the Russian River Estuary defined as a line connecting the following two points:

and westward of the Highway 1 Bridge.

Russian River SMCA bounded by the mean high tide line, the mouth of the Russian River estuary as defined in subsection 632(b)(14)(A), and straight lines connecting the following points in the order listed: