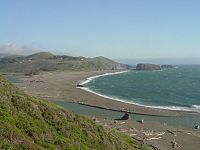 Goat Rock Beach and the mouth of the Russian River.

Goat Rock Beach is a beach in Sonoma County, California, United States. It is part of the Sonoma Coast State Beach, which is owned by the State of California. The mouth of the Russian River is in the northern part of the beach. Goat Rock is in the southern part of the beach. The beach itself was named after the rock. The naming of Goat Rock is unknown, but many sources say some goat herders around the early 20th century used the grassy, flat rock for goats, because few other animals could live there.

Goat Rock Beach has many visitors. It usually has the most people in the middle of summer. The beach is a popular spot for swimming and surfing. It is home to seagulls, harbor seals, and sea lions, as well as other animals from the Pacific Ocean.

The oldest natural history of the area is related to marks made by mammals in an area of rock about one third of a mile south of Goat Rock Beach. In uplifted sea stack formations, there are rubbing marks about two to four meters above the ground surface, too high of a rubbing mark for modern bovids. Mammoths are thought to have traveled here as recently as 40,000 years ago, and are thought to have made these rubbing marks. Mammoth fossils have been found at Bodega Head, which is a few miles south of Goat Rock Beach.

The earliest known humans to settle at Goat Rock Beach were the Native American Coast Miwok and Pomo tribes. During the mid-1800s, Mexican ranchers lived in California, and Goat Rock Beach was part of a Mexican land grant called the "Bodega Rancho". The Russians are thought to have begun cutting down the forests just north of the beach in the early 19th century.

The Russian River, which has its mouth at the north end of Goat Rock Beach, is Sonoma County's biggest watercourse and river. Just north of the Russian River mouth is the small town of Jenner, and the beach, Jenner Beach. Goat Rock is at the south end of the beach. Visitors can walk onto Goat Rock, going on a small isthmus, which is also known as a land bridge. Blind Beach is just south of Goat Rock Beach, with only Goat Rock between the two beaches, and Goat Beach is southwest of it. 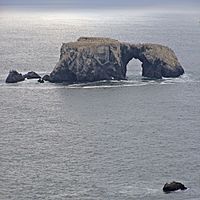 Goat Rock Beach has much marine erosion and erosion from the wind. This causes about one to three feet of land mass lost each year. Erosion is when water and wind remove the top layer of rock or mud. During big storms, there can be even more erosion.

The "sea stacks" (eroded parts of rock) along the Goat Rock Beach coast are rocks from the Franciscan Complex, rock formations which were made during earthquakes in California. About 200 years to 30 million years ago, the North American Plate collided with the Farallon Plate, causing earthquakes. Different rock types came from these collisions, including pillow basalt, chert, and sandstone. Goat Rock has a flat topped sea stack, made of greywacke. The rock formations (groups) are made of sandstone with layers of quartz.

All content from Kiddle encyclopedia articles (including the article images and facts) can be freely used under Attribution-ShareAlike license, unless stated otherwise. Cite this article:
Goat Rock Beach Facts for Kids. Kiddle Encyclopedia.