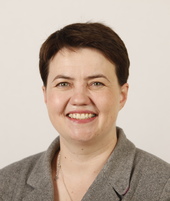 Before being an MSP she worked as a journalist. She was in the Territorial Army for three years. She also worked as a Sunday School teacher.

Davidson left the position of leader of the Scottish Conservative Party on 29 August 2019.

Davidson was born in Edinburgh. She lives in Partick, Glasgow. She is a lesbian.

All content from Kiddle encyclopedia articles (including the article images and facts) can be freely used under Attribution-ShareAlike license, unless stated otherwise. Cite this article:
Ruth Davidson Facts for Kids. Kiddle Encyclopedia.