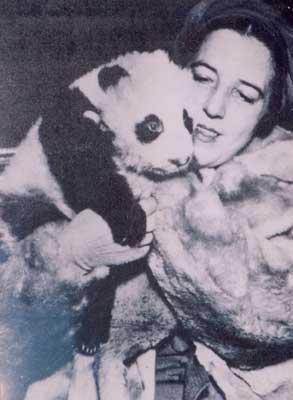 Ruth Harkness returns to the United States with Su-Lin

Ruth Elizabeth Harkness (21 September 1900 - 20 July 1947) was an American fashion designer and socialite, who traveled to China in 1936 and brought out the first live giant panda to the United States - not in a cage, or on a leash, but wrapped in her arms.

Harkness was born in Titusville, Pennsylvania. In 1934, her husband Bill Harkness had traveled to China in search of a panda, but died of throat cancer in Shanghai early in 1936. His widow Ruth, then living in New York City, decided to complete the mission herself.

Harkness traveled to Shanghai, and with the help of a Chinese-American explorer named Quentin Young, and Gerald Russell, a British naturalist, launched her own panda mission. After passing through Chongqing and Chengdu, the team arrived at a mountainous region, where, on 9 November 1936, they encountered and captured a nine-week-old panda cub. The panda, which they named Su Lin after Young's sister-in-law, was bottle-fed baby formula on the journey back to Shanghai and the United States. Su lin meant the phrase `a little bit of something very cute`. Quentin migrated to the USA in later years and felt he never go credit for his work in finding the Panda.

The panda caused a great sensation in the American press and eventually ended up at the Brookfield Zoo in Chicago.

Harkness launched two subsequent expeditions in search of the giant panda. Harkness brought back a second panda, Mei-Mei, in 1937. She did not return with a giant panda on her third and final expedition.

Following her time in China and the success of her book about her adventure with Su Lin, The Lady and the Panda. Harkness travelled Peru, where she chronicled her adventures in Pangoan Diary, and Mexico, where she wrote for Gourmet magazine.

Harkness was found dead in an NY apartment building in the 20th of July, 1947.

An IMAX film, China: The Panda Adventure, was made about her expedition in 2001. As of 2016, Lady and the Panda, a theatrical film about Harkness written and directed by Justin Chadwick, is in pre-production.

All content from Kiddle encyclopedia articles (including the article images and facts) can be freely used under Attribution-ShareAlike license, unless stated otherwise. Cite this article:
Ruth Harkness Facts for Kids. Kiddle Encyclopedia.