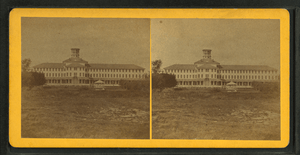 Rye Beach is an unincorporated community along the Atlantic Ocean in Rye, New Hampshire in the United States. It is located along New Hampshire Route 1A near the southern border of the town of Rye, directly south of Jenness Beach State Park and north of Little Boar's Head (in the neighboring town of North Hampton). Rye Beach has a separate ZIP code (03871) from the rest of the town of Rye.

The Ocean House built in 1844 was owned by Job Jenness. The hostelry was financed by Stacy Nudd. It started out small and eventually reached 4 stories with room for 250 guests.

Originally known as the Philbrick Hotel by John Colby Philbrick in 1865. A visit by Admiral David Farragut caused the building to be coined "Farragut House".

All content from Kiddle encyclopedia articles (including the article images and facts) can be freely used under Attribution-ShareAlike license, unless stated otherwise. Cite this article:
Rye Beach, New Hampshire Facts for Kids. Kiddle Encyclopedia.