SS Harriet B. facts for kids

The Harriet B. was a wooden-hulled barge that served on the Great Lakes of North America, originally as the railroad ferry Shenango No.2, then a bulk carrier and finally as an unpowered barge. She sank four miles off Two Harbors, Minnesota on May 3, 1922 after being rammed by the steel freighter Quincy A. Shaw. Her wreck was accidentally located upright and intact in 2005 in 656 feet (200 m) of water. On August 9, 2018 the wreck of the Harriet B. was listed on the National Register of Historic Places. 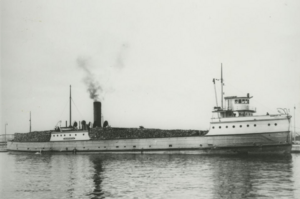 The Harriet B. with a cargo of pulpwood

In 1898 the Shenango No.2 was sold to the Detroit, Grand Rapids & Western Railroad Company of Muskegon, Michigan, and was renamed Muskegon. On October 20, 1898 the Muskegon collided with the dock & elevator of American Malting Company at Milwaukee, Wisconsin. Sometime in 1900 the Muskegon ran into ice and broke her rudder in a gale in an unknown location. In 1901 she was sold to the Pere Marquette Rail Road Company and was renamed Pere Marquette 16. On December 21, 1901 she sank at Ludington, Michigan, and was raised. In 1918 the Pere Marquette 16 was sold to the Hammermill Paper Company of Erie, Pennsylvania where she was cut down to a bulk freighter for use in the pulpwood trade, and was renamed Harriet B. In 1921 the Harriet B. was reduced to a barge.

On May 3, 1922 the freighter C.W. Jacob was towing the Harriet B., and another barge Crete; all three vessels were loaded with pulpwood. The vessels arrived near Two Harbors, Minnesota at around 1:00 a.m.; but because of heavy fog, the Jacob's captain decided to wait for the fog to clear before proceeding into the harbour. The three vessels anchored about a mile off shore, and three miles southwest of the breakwater light. Meanwhile, the steel-hulled freighter Quincy A. Shaw was moving quickly up the lake. At 4:50 a.m., the Shaw's bow appeared out of the fog and crashed into the port side of the Harriet B., almost cutting her in two. After the collision, the crew of the Harriet B. boarded the Shaw. The Harriet B. sank twenty minutes later. After she sank, her wheelhouse washed ashore nearby.

The remains of the Harriet B. were accidentally discovered in 2005 by the University of Minnesota Duluth research boat Blue Heron while they were conducting a geological survey of the lake bottom. The crew of the Blue Heron contacted Jerry Eliason and Randy Bebe, who used drop cameras and side-scan sonar to confirm the identity of the wreck.

The Harriet B. today

The Harriet B. rests upright, and almost totally intact in 656 feet (200 m) of water approximately four miles off Two Harbors, Minnesota. Because of the extreme depth of the wreck, diving is not advised. Jerry Eliason said that "even a brief visit to the wreck would require at least eight hours of decompression stops on the way back to the surface to complete the dive safely". The wreck is believed to be the most intact shipwreck in Minnesota waters.

All content from Kiddle encyclopedia articles (including the article images and facts) can be freely used under Attribution-ShareAlike license, unless stated otherwise. Cite this article:
SS Harriet B. Facts for Kids. Kiddle Encyclopedia.