Two Harbors is a city in and the county seat of Lake County, Minnesota, United States, along the shore of Lake Superior. The population was 3,745 at the 2010 census 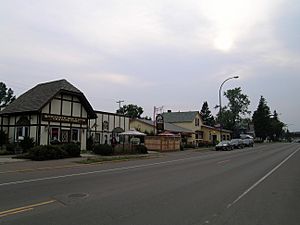 In the early years Two Harbors consisted of two separate communities called Agate Bay and Burlington. The village of Burlington along Burlington Bay was platted in 1856, first incorporated on May 23, 1857; it had a post office that operated from 1856 until 1862. The first residence constructed in Agate Bay was owned by Thomas Sexton (1854), he created a fourteen by sixteen foot shack. The early settlers lived in primitive conditions, which was common for both the area and time. Their homes were made of logs and had dirt floors. Diets often consisted of homegrown vegetables and animals that could be caught in the area (at that time there were many dense forests, so deer meat was not an abundant food source). The village of Agate Bay was created with the construction camp as work on the new railroad began in 1883. The village of Two Harbors was platted in 1885 but was not incorporated until 1888. Early transportation to the village was by boats under contract with the new Duluth & Iron Range Railroad. It took only "one short day" to get from Duluth to Two Harbors. By 1886 the D&IR completed the Lake Division connecting Duluth and Two Harbors with passenger service that extended to Ely MN. Thirty five logging camps were set up within the vicinity, one of these located on Fourth Avenue. On February 26, 1907, the village reincorporated as the City of Two Harbors. The town's history is included in the Lake County Historical Depot Museum. 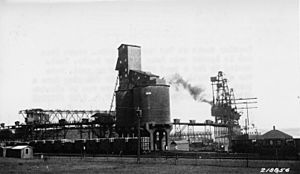 By 1883 the Minnesota Iron Company had purchased all but four acres of Thomas Sextons land around Agate Bay. Sexton leased his remaining four acres to merchants seeking to capitalize on the 600 man workforce arriving to build the Duluth & Iron Range Railroad. He divided his four acres into 32 lots. As with any frontier town of the day it was a largely male population. The infamous four acre plot earned the nickname Whiskey Row, and was said to exist for the sole purpose of "relieving a man from his pay". Contrary to popular myth Whiskey Row was not destroyed by a fire in 1888. There was fire but it occurred before the first load of ore arrived in July 1884 and only seven buildings were damaged. It was reported that the merchants affected were in Duluth the next day purchasing materials to rebuild. The demise of Whiskey row occurred the following year.

The railroad rapidly expanded its rail and shipping operations and it needed all of the shoreline for its new coal handling and storage facility. By 1885 the Minnesota Iron Company convinced Thomas Sexton to sell his remaining four acres along Agate Bay. The railroad then simply evicted the tenants and moved any of the salvageable buildings inland. There are several homes in "east" Two Harbors whose original structures were built on Whiskey Row.

According to the United States Census Bureau, the city has a total area of 3.30 square miles (8.55 km2), all of it land.

Two Harbors is located 20 miles northeast of the city of Duluth.

It is located along Lake Superior, which contributes the two natural harbors for which Two Harbors is named, Burlington Bay and Agate Bay. The warmest month in the year is July with the coldest month being January. The record high temperature was 99 °F (37 °C) in 1948 with the coldest temperature on record being −36 °F (−38 °C) in 1996. According to the Minnesota Department of Natural Resources (DNR), Two Harbors is located in a region called the Laurentian Mixed Forest Province which contains broad areas of coniferous forest, mixed hardwood, and conifer bogs and swamps. The region averages 21 to 32 inches (810 mm) of precipitation per year and has an average temperature of 34 to 40 °F (4 °C).

Built in 1896, the Edna G. was named after the president of the railroad's daughter, Edna Greatsinger, this tug is "one of a kind". The Edna G. stayed in Two Harbors its entire working career except for a small stint during World War II it spent two years on the east coast moving warships around. Until its retirement in 1981, the Edna G. was the last coal-fired, steam-powered tugboat in operation of the Great Lakes. The boat is listed on the National Register of Historic Places. Tours of this vessel are available from trained guides in the spring-fall from 10am to 5pm. A trip includes a visit to the engine room, and seeing the pilot house, where the passengers are allowed to blow the horn.

The Legend of John Beargrease

Mok-qua Bennete, or John Beargrease as he was better known, was an Ojibway man who delivered the mail between Two Harbors and Grand Marais. The following is a story found in "Memoirs and Experiences at Beaver Bay and Duluth" by H.P. Wieland, as told by Mrs. John Stein (the first caucasian child born in Lake County) about how John engaged a bear.

"Mok-qua Bennette was his real name. On the way to Beaver Bay in 1870 he spied a bear (named Mok-qua) sunning itself under a large spruce. Because of weather conditions - three feet of snow - it was impossible for the bear to move fast. The bear looked like good meat to the Indian who, unfortunately, didn't have a gun with him. He took a ten foot stick and attached a butcher knife to it thinking he would stab the bear to death. All he could do was tickle the bear. Seeing his method didn't work he cut a piece from a birch sapling with his tomahawk and tried to kill the bear by clubbing him to death. After the first blow he fell back while drawing away and got tangled in the limbs of the fallen tree. Mok-qua attacked the Indian, clawing his shoulder and arms. He did not bite him. The bear left the Indian who was unconscious. The Indian regained consciousness at night and when he did he was very sick and almost frozen. He somehow dragged himself to the farm of Jacob Hangarner who, after warming and feeding him, brough him to Beaver Bay. The Indian suffered more from exposure than from the attack."

Beargrease was the only lifeline to the outside world.

A sled dog marathon was started as a tribute to John Beargrease for his vital role in the early history of the North Shore of Lake Superior. The race covers nearly four hundred miles on the route between Duluth and Grand Portage. The race is traditionally held in the last week of January.

The city also hosts the Lake County Fair, The Two Harbors Folk Festival, Heritage Days, and the Two Harbors Kayak Festival. Two Harbors is one of the checkpoints for the Beargrease Sled Dog Marathon, as well as the start line for the Grandma's Marathon and the NorthShore Inline Marathon. Author, Dean L. Hovey, wrote a mystery set in a fictional Two Harbors senior living center entitled, "Whistling Pines" (published in 2012), followed by a sequel entitled "Whistling Sousa" (published in 2013).

Two Harbors is the gateway city to the Northern Shore of Minnesota. Highway 61 is the only major highway heading north/north-east along the shore of Lake Superior and is the fastest way to travel to the eight state parks of the North Shore, as well as Wayside rests and Lake-shore access. These include Gooseberry Falls, Split Rock Lighthouse, Tettegouche, George H. Crosby Manitou State Park, Temperance River State Park, Cascade River State Park, Judge C.R. Magney State Park, and Grand Portage State Park.

5 miles further up Hw61 Split Rock Lighthouse State Park is home to the Split Rock Lighthouse. Located within but separate from the State Park, and run by the Minnesota Historical Society, the 1910 lighthouse grounds are open year-round for tours, and the lighthouse and restored buildings are open from May to October for historic tours. The State Park offers miles of hiking trails, picnicking along the shore of Lake Superior, as well as access to the Gitchi-Gami bike trail and Lake Superior Hiking Trail. The secluded cart-in and backpack campsites are consistently voted among the best in the State for their privacy and views of Lake Superior.

35 miles past Two Harbors, on the Baptism River, Tettegouche State Park is the largest park located on the North Shore covering over 9,300 acres (38 km2). Campers can stay in either the two campgrounds, remote hike-in or modern drive-in rental cabins. Features include six inland lakes, two and a half miles of Lake Superior Shoreline, and four beautiful waterfalls. Visitors can take advantage of the hiking, rock climbing, kayaking, skiing and snowmobile trails available.

Two Harbors offers access to Minnesota trails. The Sonju hiking trail can be used to view the Two Harbors shoreline, and the Gitchi-Gami State Trail is available for use by pedestrians, bicyclists, and skaters. North Shore State Snowmobile Trail includes scenic views for snowmobilers, as do the Yukon Snowmobile Trail and Brimson Snowmobile Trail. There is also the Erkki Harju Ski Trail.

In 1901, Two Harbors decided it needed a high school. On February 12, 1902, Two Harbors Central High School was dedicated at a cost of $35,025. It was on the 400 block of Fourth Avenue, and had 50 students and three teachers. The first students to graduate were Mary Rylander and Ann Paulson. The school taught arithmetic, grammar, and American history. Very little English was taught at the time. In 1903 Latin and music were introduced. Courses in science and sewing were added in 1906. Manual training and domestic services were introduced in 1908. By 1909 the school had 98 students and seven teachers. By 1910 the school library had 7,000 books. Plans for a new building were announced in 1935, at an estimated $100,000. The original Central High School was demolished and the new building was completed in 1939. At completion, and after all additions were made, the total cost was $585,000. A referendum for a new building two miles (3 km) north of town on Lake County Highway 2 (CR 2) was passed in 2003. Building was completed and classes began in 2005. Students use the hiking trails in the woods, around ponds, and the football field. The former high school on 4th Avenue was demolished in 2008.

All content from Kiddle encyclopedia articles (including the article images and facts) can be freely used under Attribution-ShareAlike license, unless stated otherwise. Cite this article:
Two Harbors, Minnesota Facts for Kids. Kiddle Encyclopedia.