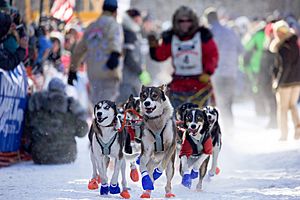 The John Beargrease Sled Dog Race is a dogsled race held along the North Shore of Lake Superior in northeast Minnesota. At 400 miles, it is the longest sled dog race in the lower 48 states. The "Beargrease" is a qualifier for the famed Iditarod race in Alaska.

The name of the race honors John Beargrease, a winter mail carrier who traveled by dog sled between Two Harbors, Minnesota and Grand Portage, Minnesota during the last two decades of the nineteenth century.

The race has been held every January since 1980.

The race was rerouted in 2019, and the course was shortened by 70 miles, due to lack of snow.

All content from Kiddle encyclopedia articles (including the article images and facts) can be freely used under Attribution-ShareAlike license, unless stated otherwise. Cite this article:
John Beargrease Dog Sled Race Facts for Kids. Kiddle Encyclopedia.