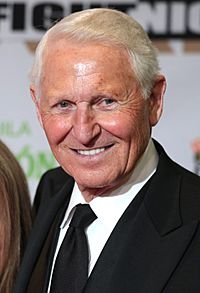 He was also honored in the National Collegiate Basketball Hall of Fame (2006) and re-inducted in the class of 2019.

On October 23, 2008, Olson announced his retirement from coaching.

Olson died on August 27, 2020 under hospice care in Tucson, Arizona from stroke-related problems at the age of 85.

All content from Kiddle encyclopedia articles (including the article images and facts) can be freely used under Attribution-ShareAlike license, unless stated otherwise. Cite this article:
Lute Olson Facts for Kids. Kiddle Encyclopedia.