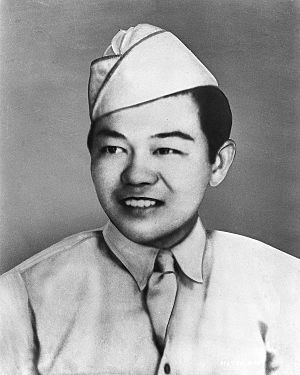 In this Japanese name, the family name is Munemori.

Sadao Munemori (born August 17, 1922-April 5, 1945) was a United States Army soldier. He received the Medal of Honor because of his actions in World War II.

Munemori was born in Los Angeles, California to Japanese immigrant parents. He is a Nisei, which means that he is a second generation Japanese-American.

During World War II, Munemori's parents and siblings were interned at the Manzanar concentration camp.

Munemori volunteered to be part of the all-Nisei 100th Infantry Battalion. This army unit was mostly made up of Japanese Americans from Hawaii and the mainland.

For his actions in April 1945, he was the only Japanese American to be awarded the Medal of Honor during or immediately after World War II.

Sadao Munemori is the namesake of a part of the California highway system, a ship, a building and an American Legion post.

All content from Kiddle encyclopedia articles (including the article images and facts) can be freely used under Attribution-ShareAlike license, unless stated otherwise. Cite this article:
Sadao Munemori Facts for Kids. Kiddle Encyclopedia.