Saint Paul's Episcopal Church (also known as Borough Church) is a historic church in Norfolk, Virginia, United States. Built in 1739, it is the sole colonial-era building which survived the various wars that Norfolk has witnessed. The church has played host to several different denominations throughout its history. Originally an Anglican church, the building was home to a Baptist parish in the early-19th century and was finally converted back into an Episcopal church.

During the Revolutionary War, the Church of England was disestablished in Virginia and replaced with the Protestant Episcopal Church in America. The Elizabeth River Parish of this new church was divided in 1797 by two feuding congregations. One faction formed Christ Church (which later became Christ and St. Luke's Church), while the other retained the building until 1803, when it was acquired by Baptists. The Episcopalians reclaimed the building in 1832, and Bishop Richard Channing Moore reconsecrated it under the name Saint Paul's. 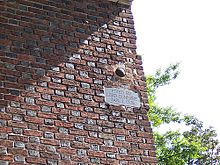 Cannonball in the wall of Saint Paul's Episcopal Church

Following his defeat at the Battle of Great Bridge, Lord Dunmore attacked Norfolk from the sea as he fled Virginia on January 1, 1776. In retaliation, patriots set fire to the homes of loyalists; however, the fire became unmanageable, and nearly the entire town was destroyed by the flame. The church was the only major building in the city to escape substantial damage in the assault, though a cannonball (purportedly fired by the Liverpool) did strike its wall. By the 1830s, the cannonball was no longer embedded in the wall. However, it was discovered buried in the yard of the church, and returned to its original resting place in the 1840s, and remains there today. During the Civil War, the building acted as a chapel for the Union army, and was returned after the surrender of Robert E. Lee, though it required extensive repairs.

Visiting the church while in Norfolk during World War II, Lord Louis Mountbatten is reputed to have said that Dunmore's cannonball "damn near missed" its target.

General Douglas McArthur requested to be buried in Norfolk, Virginia, where his mother had been born and where his parents had married. Accordingly, his funeral service was held in St Paul's and his body was finally laid to rest in the rotunda of the Douglas MacArthur Memorial (the former courthouse in Norfolk) on 11 April 1964.

All content from Kiddle encyclopedia articles (including the article images and facts) can be freely used under Attribution-ShareAlike license, unless stated otherwise. Cite this article:
Saint Paul's Episcopal Church (Norfolk, Virginia) Facts for Kids. Kiddle Encyclopedia.