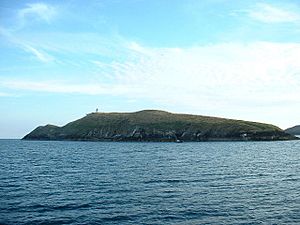 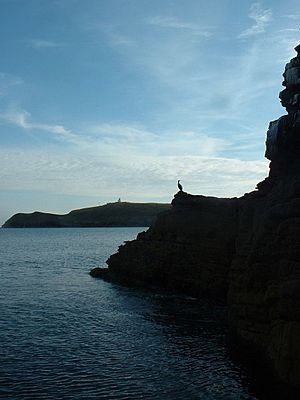 Saint Tudwal's Island East with West island in the background

Saint Tudwal's Islands (Welsh: Ynysoedd Tudwal) are a small archipelago lying south of Abersoch on the Llŷn Peninsula in North Wales, at the western end of Tremadog Bay. They were apparently referred to as the Studwells in the early 19th century.

The highest point on the island is 125 feet (38 m) above sea level. It is located just over 0.62 miles (1.00 km) off the Llŷn Peninsula in Gwynedd. The nearest settlement (apart from the lighthouse on Saint Tudwal's Island West) is Machroes. Small ships sail from the nearby town of Abersoch to take passengers to view the wildlife. The island is believed to be the original hermitage of Saint Tudwal, which is presumably where its name comes from. The remains of a priory, referred to in the 1291 tax rolls, can be found on its eastern side.

The West island was purchased by adventurer Bear Grylls and converted into a holiday home. On 22 August 2013 it was reported that he was facing a planning investigation by Gwynedd Council, after installing a slide into the sea. He has since taken the slide down, saying it was never intended to be permanent and that he would clear it with the council before using it again.

All content from Kiddle encyclopedia articles (including the article images and facts) can be freely used under Attribution-ShareAlike license, unless stated otherwise. Cite this article:
Saint Tudwal's Islands Facts for Kids. Kiddle Encyclopedia.