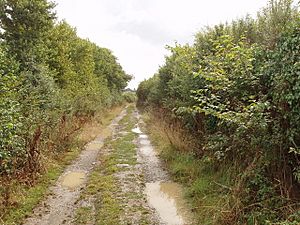 The Saints' Way at Trenance 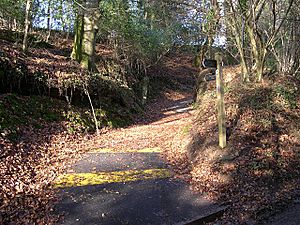 A signpost on the Saints' Way 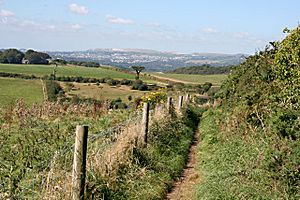 The Saints' Way (Cornish: Forth an Syns) is an ancient trackway and long-distance footpath in mid Cornwall, England, UK.

The Saints' Way follows the probable route of early Christian travellers making their way from Ireland to the Continent. Rather than risk the difficult passage around Land's End they would disembark their ships on the North Cornish coast and progress to ports such as Fowey on foot.

Between 55 - 50AD a Roman trading centre was constructed at Nanstallon (near Bodmin) and it is thought its purpose was to serve the main communication and trade route linking the north Cornish coast at the River Camel and the southern coast at the River Fowey, the 'transpeninsular route'. However the centre was abandoned after only 20-25 years and it was never used again. It is thought that the trading route served the Celtic peoples of Ireland, Wales, Cornwall and Brittany as Nanstallon was built close to major mineral bearing areas.

The establishment of the way followed the discovery of a section of abandoned pathway surfaced with cobbles and featuring a series of granite stiles near the village of Luxulyan by two villagers in 1984. The way was created as part of the Cooperative Retail Services Community Programme and opened in 1986.

All content from Kiddle encyclopedia articles (including the article images and facts) can be freely used under Attribution-ShareAlike license, unless stated otherwise. Cite this article:
Saints' Way Facts for Kids. Kiddle Encyclopedia.