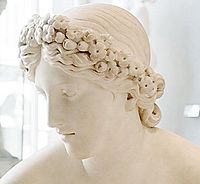 In Greek mythology, Salmacis was a naiad nymph of a spring at Caria in Asia Minor. She didn't follow the other nymphs of the goddess Diana and united bodies with Hermaphroditus becoming a single being, both male and female.

"There dwelt a Nymph, not up for hunting or archery:

unfit for footraces. She the only Naiad not in Diana’s band.
Often her sisters would say: “Pick up a javelin, or
bristling quiver, and interrupt your leisure for the chase!”
But she would not pick up a javelin or arrows,
nor trade leisure for the chase.
Instead she would bathe her beautiful limbs and tend to her hair,
with her waters as a mirror."

According to Ovid's myth, she fell in love with Hermaphroditus, the son of Hermes and Aphrodite. When he bathed in her spring, she embraced him and prayed to the gods to be united with him forever, the gods heard her prayer and merged their bodies together, transforming Hermaphroditus into an androgynous being. Hermaphroditus then cursed the spring of Salmacis, so that any man who drank or bathed in its water would also become androgynous.

All content from Kiddle encyclopedia articles (including the article images and facts) can be freely used under Attribution-ShareAlike license, unless stated otherwise. Cite this article:
Salmacis Facts for Kids. Kiddle Encyclopedia.