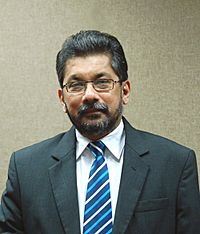 Saman Kelegama (6 April 1959 – 23 June 2017) was a Sri Lankan economist and author. He served as the Executive Director of the Institute of Policy Studies(Sri Lanka) (IPS) until his death in 2017. He was born in Colombo, Sri Lanka. He also served as the Chairperson of the Evaluation Committee on Best Corporate Citizen Award of the Ceylon Chamber of Commerce from 2004 to 2013; and was the head of the panel of judges for the Exporter of the Year Award of the National Chamber of Exporters of Sri Lanka from 1998 to 2008.

Kelegama died on 23 June 2017 of a heart attack while attending a seminar in Bangkok, Thailand. He was 58 yeas old.

All content from Kiddle encyclopedia articles (including the article images and facts) can be freely used under Attribution-ShareAlike license, unless stated otherwise. Cite this article:
Saman Kelegama Facts for Kids. Kiddle Encyclopedia.