The San Jose Museum of Quilts & Textiles is an art museum in Downtown San Jose, California, USA. Founded in 1977, the museum is the first in the United States devoted solely to quilts and textiles as an art form. Holdings include a permanent collection of over 1,000 quilts, garments and ethnic textiles, emphasizing artists of the 20th- and 21st-century, and a research library with over 500 books concerning the history and techniques of the craft. 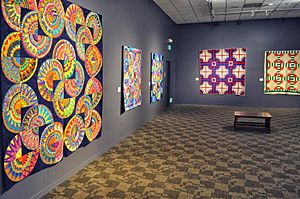 The San Jose Museum of Quilts & Textiles is the United States' oldest museums of textiles.

The San Jose Museum of Quilts & Textiles (SJMQT) had its beginnings as the American Museum of Quilts and Related Arts, founded in Los Altos, California by the Santa Clara Valley Quilt Association in 1977. It was incorporated in 1986 as a nonprofit public benefit museum, managed by a board of trustees. It relocated several times until it moved into its 13,000 square feet (1,200 square metres) permanent home in San Jose’s SoFA (South First Area) Arts District in 2005.

The Museum provides exhibitions from around the world, focusing on the way people of many cultures use textiles to make their voices heard. Many of the artists on exhibit at the Museum incorporate modern technology into the basic traditions of fiber art. Exhibitions and individual installations typically remain on view 3 months.

Exhibitions have included solo showings from contemporary Bay Area fiber artists, as well as broader surveys of international cultural traditions and their contemporary expressions. In 2018, San Jose Museum of Quilts and Textiles held an exhibition, organized by the Studio Art Quilt Associates, that featured a number of quilts centered around the theme of gun violence called Guns: Loaded Conversations.