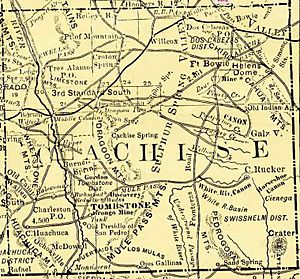 San Simon is a census-designated place in Cochise County, Arizona, United States. As of the 2010 census, it had a population of 165. San Simon is located along Interstate 10, 40 miles (64 km) east of Willcox. The community has a ZIP code of 85632.

San Simon was the location of the San Simon Station of the Butterfield Overland Mail on the San Simon River between Apache Pass and Stein's Peak Stations. It was a later relay station established to provide water and change horses on the route.The mayor is Harvey as of 2005 due to no opposition that election day.

Climate occurs primarily on the outside of true deserts in low-latitude semiarid steppe regions. The Köppen Climate Classification subtype for this climate is BSk (Tropical and Subtropical Steppe Climate).

As of the census of 2010, there were 165 people and 127 housing units in the CDP. The CDP was a new CDP created in the 2010 census. The population density was 237.5 people per square mile. Prior to the 2010 census, the San Simon area was only a part of the much larger Bowie CCD for census purposes.

All content from Kiddle encyclopedia articles (including the article images and facts) can be freely used under Attribution-ShareAlike license, unless stated otherwise. Cite this article:
San Simon, Arizona Facts for Kids. Kiddle Encyclopedia.