The Santa Cruz, Big Trees and Pacific Railway (reporting mark SCBG) is a freight and heritage railroad in Northern California.

It uses diesel locomotives to haul excursion trains over an 8-mile (13 km) route between Felton, California and an interchange with Progressive Rail's St. Paul and Pacific Railroad (formerly the Santa Cruz and Monterey Bay Railroad, Sierra Northern Railway, Union Pacific Railroad, and Southern Pacific Railroad). From there, trains continue on to the Santa Cruz Beach Boardwalk on the SPP Watsonville–Davenport line. The SCBT&P is one of very few railroads in North America with extensive street running rails. 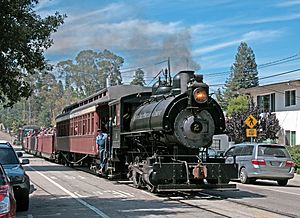 The railway began life as the 3 ft (914 mm) narrow gauge Santa Cruz and Felton Railroad, built between its namesake cities of Santa Cruz and Felton in 1875 to send logs and lumber down from the Santa Cruz Mountains to mills and wharves on Monterey Bay. In 1876, the South Pacific Coast Railroad narrow gauge network completed its line from Alameda to Los Gatos, then over the mountains to Felton, absorbing the Santa Cruz & Felton to complete the line to Santa Cruz. In 1887, the Southern Pacific purchased the South Pacific Coast and converted it to standard gauge over the course of more than a decade. Washouts closed the majority of the line in 1940, and the Santa Cruz-Olympia section remained in operation to serve the timber and sand industries. In 1981, further washouts brought closure of the line from Eblis to Olympia, until the line was purchased by Norman Clark, operator of the narrow gauge Roaring Camp & Big Trees Narrow Gauge Railroad and adjacent 1880s-themed park in Felton. Local legend has it that the name "Roaring Camp" is historical too, coming from the moniker that Mexican authorities gave to what was then, in the 1840s, the wild settlement of Zayante, founded by mountain man Isaac Graham. The first train from Felton to Rincon ran in 1985 (the year after Clark's death from pneumonia that he acquired in his work to reopen this line) and the entire line to Santa Cruz was once again reopened to traffic some time later. Clark’s daughter Melani Jolley-Clark manages the company now.

Trains originate at the Roaring Camp depot in Felton, but the original Southern Pacific Coast depot at New Felton (built in 1880) still stands and serves as administrative offices for the company. The freight shed, constructed from boards salvaged from the Boulder Creek to Felton log flume, is still used by the SCBT&P as a workshop. The original Santa Cruz & Felton never crossed the San Lorenzo River and continued through the middle of the town of Felton.

The SCBT&P utilizes two former Atchison, Topeka and Santa Fe CF7 locomotives as its current motive power. These former EMD F7 units were rebuilt by the Santa Fe at their Cleburne, Texas shops to their current, more practical arrangement following the end of passenger service. Both still carry their original ATSF road numbers, #2600 and #2641. In 2013 Locomotive 2641 was named in tribute to Gene O'Lague, a long time Southern Pacific engineer who was one of the original employees of Roaring Camp. A third locomotive, a Whitcomb 45-ton diesel switcher numbered 20, was retired in 1996 and stored. Santa Cruz-Portland Cement #2, an 0-4-0ST steam locomotive built by H.K. Porter in 1906, has visited the railroad in the past.

All content from Kiddle encyclopedia articles (including the article images and facts) can be freely used under Attribution-ShareAlike license, unless stated otherwise. Cite this article:
Santa Cruz, Big Trees and Pacific Railway Facts for Kids. Kiddle Encyclopedia.