Smith came to Tokyo in 1880 with her missionary group, Association of Presbyterian Mission International. In 1883, she became sick from the weather, so she went north to Sapporo, Hokkaido. She became healthy again because the weather was like the weather in New York. 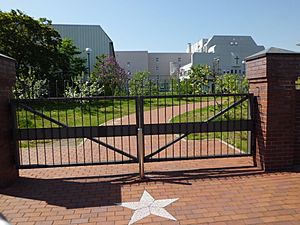 Smith wanted to start a Christian school in Sapporo because it was a new town. Sapporo didn't have many churches then. But her group didn't give her money, so she went to Hakodate. Hakodate was bigger than Sapporo. In 1886, she got an English teaching job at the Public Teacher’s College of Sapporo. The next year, she could start a Christian school by herself. It was called Smith Girls' School (Japanese: ｽﾐｽ女子学校 Sumisu Joshi Gakkou).

In the Meiji Era (1868–1912), Hokkaido was a new land in Japan. Also the land was big, so there were many farms. Most schools were farming schools. Smith Girls' School had some farming and Christian education. In 1890, Smith introduced lilacs to Sapporo from the United States. Now, lilac is the official tree of Sapporo and the city has a lilac festival every year in downtown Odori Park.

All content from Kiddle encyclopedia articles (including the article images and facts) can be freely used under Attribution-ShareAlike license, unless stated otherwise. Cite this article:
Sarah Clara Smith Facts for Kids. Kiddle Encyclopedia.