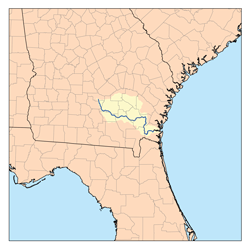 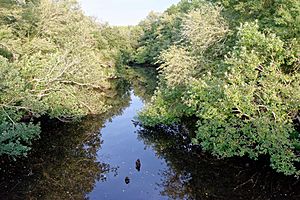 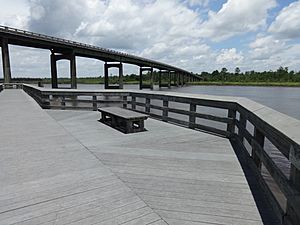 The Satilla River rises in Ben Hill County, Georgia, near the town of Fitzgerald, and flows in a mostly easterly direction to the Atlantic Ocean. Along its approximately 235-mile (378 km) course are the cities of Waycross, Waynesville, and Woodbine. The Satilla drains almost 4,000 square miles (10,000 km2) of land, all of it in the coastal plain of southeastern Georgia. It has white sandbars and is the largest blackwater river situated entirely within Georgia.

The river derives its name from a Spanish officer named Saint Illa, and over time the name was corrupted to form the word Satilla.

The Satilla enters the Atlantic Ocean about 10 miles (16 km) south of Brunswick, at the 31st parallel north. Satilla River Marsh Island is one of the few places in Georgia for observing nesting sites of brown pelicans.

In May 2010, the city of Waycross purchased the Bandalong Litter Trap and installed it in Tebeau Creek, a tributary of the Satilla River. The trap was invented in Australia, but is manufactured in the United States by Storm Water Systems. Although the city has maintained a good standing with the Environmental Protection Division, the city wanted to take action to reduce the amount of human generated trash entering the Satilla River and, ultimately, the Atlantic Ocean. Governor Sonny Perdue said, "Water is one of Georgia's most important and precious resources... the litter trap installed by Waycross is a model of stewardship for the state and the nation." The Satilla River litter trap is the first in Georgia and only the second in the nation.

All content from Kiddle encyclopedia articles (including the article images and facts) can be freely used under Attribution-ShareAlike license, unless stated otherwise. Cite this article:
Satilla River Facts for Kids. Kiddle Encyclopedia.