The city of Fitzgerald is the county seat of Ben Hill County in the south central portion of the U.S. state of Georgia. As of the 2010 census, it had a population of 9,053. It is the principal city of the Fitzgerald Micropolitan Statistical Area, which includes all of Ben Hill and Irwin counties.

Fitzgerald was developed in 1895 by Philander H. Fitzgerald, an Indianapolis newspaper editor and a former drummer boy in the Union Army, who founded it as a community for Civil War veterans – both from the Union and from the Confederacy. The majority of the first citizens (some 2700) were Union veterans. It was incorporated on December 2, 1896. The town is located less than 15 miles (24 km) from the site of the capture of Confederate president Jefferson Davis on May 10, 1865.

Fitzgerald is one of the few truly planned cities in the United States. The city was laid out as a square, with intersecting streets dividing it into four wards. Each of the wards was divided into four blocks and each block had sixteen squares. Streets running North/South on the east side of the city were named after Confederate ships and generals, whereas the ones on the west side were named after Union ships and generals.

After about a year, the citizens planned a Thanksgiving harvest parade. Separate Union and Confederate parades were planned. However, when the band struck up to play, the Confederates joined the Union veterans to march as one beneath the US flag.

In recent years, the unofficial, and sometimes controversial, mascot of the city has become the red junglefowl, a wild chicken native to the Indian subcontinent. In the late 1960s, a small number were released into the woods surrounding the city and have thrived to this day.

The Ben Hill County Courthouse and Ben Hill County Jail in Fitzgerald are listed on the National Register of Historic Places. The Fitzgerald Commercial Historic District was listed on the Register on April 28, 1992. It is generally bounded by Ocmulgee, Thomas, Magnolia and Lee Streets. The South Main-South Lee Streets Historic District was listed in April 13, 1989 and is generally bounded by Magnolia Street, S. Main Street, Roanoke Drive, and S. Lee Street. The Dorminy-Massee House at 516 W. Central Avenue, the Holtzendorf Apartments at 105 W. Pine Street, and the Miles V. Wilsey House at 137 Hudson Road are also listed on the register. 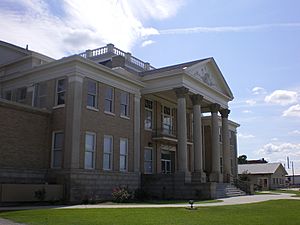 Fitzgerald is home to the Dorminy-Massee House, now a bed and breakfast. Built in 1915 by J. J. (Captain Jack) Dorminy for his family, this two-story, colonial-style home is now listed on the National Register of Historic Places. 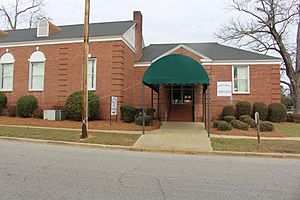 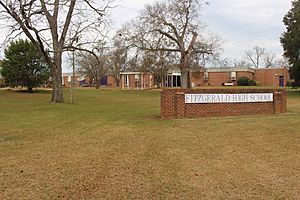 The Ben Hill County School District conducts pre-school to grade twelve, and consists of one pre-school, one primary school, an elementary school, a middle school, and a high school. The district has 217 full-time teachers and over 3,395 students.

Wiregrass Georgia Technical College – Ben Hill-Irwin Campus is located on the southern end of the county.

All content from Kiddle encyclopedia articles (including the article images and facts) can be freely used under Attribution-ShareAlike license, unless stated otherwise. Cite this article:
Fitzgerald, Georgia Facts for Kids. Kiddle Encyclopedia.