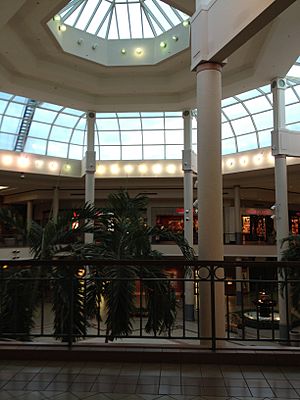 Savannah Mall is an enclosed regional shopping mall on the southside of Savannah, Georgia, that opened August 29, 1990. Anchor stores include Target, Bass Pro Shops, and Dillard's. There are 2 vacant anchor stores that were once Montgomery Ward and Burlington Coat Factory.

When it opened in 1990, Savannah Mall was expected to succeed Savannah's older Oglethorpe Mall. Savannah Mall was considered upscale and featured stores exclusive to the market like Abercrombie & Fitch, Ann Taylor, Banana Republic, United Colors of Benetton, and The Disney Store. Belk and J.B. White opened with the mall. Parisian and Montgomery Ward opened in 1991. Montgomery Ward's building was slated for Jordan Marsh, but plans for this were canceled when the chain folded. Montgomery Ward pulled out of the mall in 1998 during their bankruptcy. Also that year Dillard's acquired J.B. White and retired the JB White name. Parisian and Belk both left the mall in early 2003. At this point, many stores were leaving the mall and by 2005, there were more than 20 vacancies, with some stores relocating to Oglethorpe Mall, and others exiting the Savannah market altogether.

In August 2003, Bass Pro Shops opened in the space vacated by Parisian. Target opened its first Savannah area store in the mall in October 2004. Target demolished the Belk building to construct a new 213,735-square-foot (19,856.6 m2) building. Target occupies the second level, and Burlington Coat Factory re-entered the Savannah market with a location on the first floor in 2006 and remained in this location until relocating across town in 2020. Steve & Barry's opened in 2004 in the former Montgomery Ward, and closed in 2009. A.C. Moore opened as a junior anchor in 2007 and lasted until 2019.

As of 2020, the mall has about 20 businesses remaining. Bath & Body Works, Cato, and Hibbett Sports are the only national retailers remaining aside from the anchors.

All content from Kiddle encyclopedia articles (including the article images and facts) can be freely used under Attribution-ShareAlike license, unless stated otherwise. Cite this article:
Savannah Mall Facts for Kids. Kiddle Encyclopedia.