The Savannah National Wildlife Refuge is a 31,551 acre (128 km²) National Wildlife Refuge located in Chatham and Effingham counties in Georgia and Jasper County in South Carolina. Of the total area, 15,395 acres (62 km2) is in Georgia and 15,263 acres (62 km2) is in South Carolina. The refuge was established to provide sanctuary for migratory waterfowl and other birds and as a nature and forest preserve for aesthetic and conservation purposes.

The refuge is one of seven refuges administered by the Savannah Coastal Refuges Complex in Hardeeville, South Carolina. The complex has a combined staff of 25 with a fiscal year 2018 budget of roughly $3,000,000.

The first European visitors to the Savannah, Georgia area arrived in 1526. James Oglethorpe established the city of Savannah in 1733. By the mid-eighteenth century, rice planters were farming much of the land that is now part of the refuge. The old rice levees, which were built by hand, form the basis for current impoundment dikes. Remnants of the original rice field trunk water control structures and narrow dikes are still visible in some places. Within the impoundment system there are 36 historic and prehistoric archeological sites which have been located and inventoried.

These three Executive Orders established the 9,086-acre (37 km2) core of the present refuge; subsequent acquisition using Federal Duck Stamp funds and other special funding added 3,557 acres (14 km2). An additional 459 acres (1.9 km2) were added when the fee title to Hog Marsh Island and adjacent lands to the north were acquired through an exchange of spoilage rights with Chatham County, Georgia. In 1964, Savannah Electric and Power Company deeded 34 acres (140,000 m2) to the refuge in exchange for a power line right-of-way. In 1978, the 12,472-acre (50 km2) Argent Swamp tract was purchased from Union Camp Corporation using Land and Water Conservation Funds. Bear Island (687 acres) was purchased in fee title, from a private individual, on October 19, 1993. In order to straighten the east boundary, two tracts totaling 54 acres (220,000 m2) were purchased from Union Camp Corporation on August 27, 1996. The Barrows tract (535 acres), which lies adjacent to the southeast boundary, was purchased in fee title during 1998. Another tract of land was added onto the mid-western portion of the refuge; the Solomon tract was purchased in 1999 and is 887 acres (3.6 km2). The total current refuge area is 29,174 acres (118 km2).

The refuge is located in the heart of the Lowcountry, a band of low land, bordered on the west by sandhill ridges and on the east by the Atlantic Ocean, extending from Georgetown, South Carolina to St. Mary's, Georgia.

There are 38 miles (61 km) of river and over 25 miles (40 km) of streams and creeks within the refuge boundaries. Refuge habitats include bottomland hardwoods, palustrine, estuarine and tidal freshwater wetlands. Managed freshwater impoundments make up about 3,000 acres (12 km²). 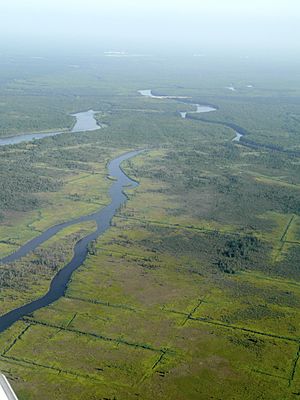 View of the northern section of the Savannah National Wildlife Refuge.

Known for its rich flora during the humid summer months, the region also supports a diverse wildlife population. The variety of birdlife within the Lowcountry is enhanced by its location on the Atlantic Flyway. During the winter months, thousands of mallards, pintails, teal and as many as ten other species of ducks migrate into the area, joining resident wood ducks on the refuge. In the spring and fall, transient songbirds stop briefly on their journey to and from northern nesting grounds.

A visitor center on the South Carolina side of the refuge opened in March, 2010, approximately eight miles south of Hardeeville and seven miles from downtown Savannah, GA on US Hwy 17. The Visitor Center features exhibits describing the history and denizens of the refuge, an introductory video, and "The Gator Hole", a nature and book store. The Visitor Center is open from 9AM until 4PM Monday thru Saturday, closed on Sunday and all Federal holidays. There are opportunities for hiking, cycling, photography and wildlife observation. Pets are not allowed in the refuge.

All dikes are open to foot travel during daylight hours, unless otherwise posted, and provide excellent wildlife observation points. The Cistern Trail, Tupelo Trail and other walking routes are also available to the visiting public.

The Laurel Hill Wildlife Drive is open from dawn until dusk every day. This one-way loop meanders along 4.5 miles (6 km) of earthen dikes through managed freshwater pools and hardwood hammocks. The dikes and pools are remnants of pre-Civil War rice plantations.

Fishing is permitted in the freshwater pools from March 1 to November 30 and is governed by South Carolina and refuge regulations. The refuge administers a variety of hunts during the fall and winter. Hunt regulations and schedules are available at the Visitor Center and on the web at http://www.fws.gov/refuge/savannah.

Volunteers play an important role in supporting and enhancing refuge operations. Volunteers staff the information desk and "The Gator Hole" at the Visitor Center, help with invasive species eradication, do trash pickup and other routine maintenance, participate in ongoing wildlife management activities, and advocate for the refuges before governmental agencies. For more information contact Friends of the Savannah Coastal Wildlife Refuges at the link below.

All content from Kiddle encyclopedia articles (including the article images and facts) can be freely used under Attribution-ShareAlike license, unless stated otherwise. Cite this article:
Savannah National Wildlife Refuge Facts for Kids. Kiddle Encyclopedia.