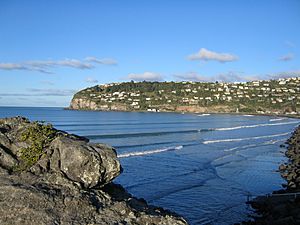 Scarborough seen from Sumner beach; Nicholson Park is the area to the left just below the ridgeline

Scarborough is a hillside suburb above Sumner in Christchurch, New Zealand.

Scarborough is located between Sumner and Te Onepoto / Taylors Mistake. It was named for the seaside resort in North Yorkshire, England. The first European owner of most of the land was Major Alfred Hornbrook, whose Mount Pleasant run stretched as far east as Godley Head. A small land parcel of 25 acres (10 ha) near present-day Nicholson Park belonged to Charles Church Haslewood, who died in May 1858 when his hunting gun discharged while he looked down the barrel.

The land was purchased by R. M. Morten, and after his death, his sons had Scarborough subdivided into 65 sections by July 1911. The first person who built in the area was Donald Patterson, a prominent civil engineer. Patterson purchased all the land in the triangle formed by Scarborough Road and Flowers Track, and had it resurveyed into 41 sections, twice the number of the Morten brother survey.

Of parks in Christchurch, Nicholson Park would have some of the most spectacular views. From vantage points in this 4 hectares (0.040 km2) location, good views can be had of Sumner and the Canterbury coastline. Flowers Track can be descended from here, and it was the main start point of the spectacular walking track along the cliff tops that formed an early connection between Sumner and Taylors Mistake. The track went past Whitewash Head and Sumner Head; the former name was first recorded by Thomas Potts in his book Out in the Open in 1882 and it is presumed that it refers to the white appearance from shag droppings. The walkway was destroyed in the two earthquakes that hit on 13 June 2011; the first had its epicentre in Taylor's Mistake, and the second had its epicentre in Sumner. Much of the cliff faces collapsed into the sea below.

Some of the land near the cliffs has been red zoned and purchased by the Canterbury Earthquake Recovery Authority. Houses on those properties are to be demolished, and the land is so unstable that drones are used to survey the land for establishing the best demolition method.

All content from Kiddle encyclopedia articles (including the article images and facts) can be freely used under Attribution-ShareAlike license, unless stated otherwise. Cite this article:
Scarborough, New Zealand Facts for Kids. Kiddle Encyclopedia.