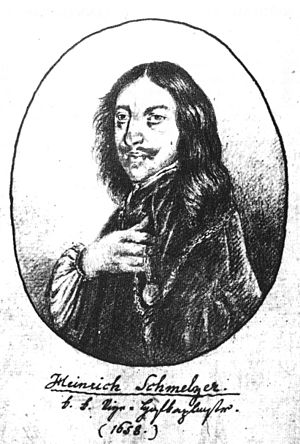 Johann Heinrich Schmelzer (born Austria some time between 1620 and 1623; died in Prague some time between 29 February and 20 March) was a German composer. He was one of the most important composers of instrumental music in the mid-17th century.

Nothing is known about his early life. He became a member of the imperial chapel in the mid 1630’s. His job there was probably a violinist. We know very little about his life, except that over the years he became a famous composer. The emperor must have liked him because he gave him presents of money and gold chains.

Schmelzer wrote a lot of music for small groups of instruments as well as a lot of ballet music. His dance suites are made up of several dances such as galliard, bourree, sarabande, gigue, gavotte and allemande as well as more unusual dances. He wrote several sonatas for two violins and continuo. They are full of fast scales and arpeggios. He also seems to have written church music, but it has all been lost.

All content from Kiddle encyclopedia articles (including the article images and facts) can be freely used under Attribution-ShareAlike license, unless stated otherwise. Cite this article:
Johann Heinrich Schmelzer Facts for Kids. Kiddle Encyclopedia.