The scrawled cowfish (Acanthostracion quadricornis) is a species of boxfish native to the eastern Atlantic. They range in size from 8–15 inches (20–38 cm), with a maximum length of 18 inches (46 cm), and can be found at depths between 6 and 80 feet (1.8 and 24.4 m). It is common to occasional in Florida and Bahamas; occasional to uncommon in the Caribbean. It also occurs in the Gulf of Mexico, north to Massachusetts, Bermuda and south to Brazil in tropical and warm temperate waters.

The scrawled cowfish spawns during the months of January and February, and July through September. They release the eggs in pelagic waters and eventually settle as juveniles out of the water column.

Because the scrawled cowfish is a shallow water species, it will mostly always be found in and along grass beds. If disturbed it may remain motionless apparently relying on camouflage.

The scrawled cowfish likes to eat small invertebrates such as crabs and tunicates. It also will feed on some species of marine vegetation. 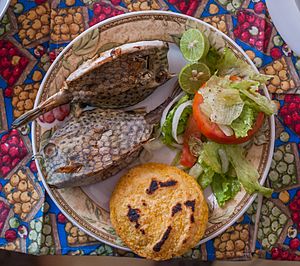 Acanthostracion quadricornis as part of a dish in Margarita Island

Scrawled cowfish can be quite tasty if cooked properly. It is locally abundant in the Caribbean region and often sold fresh. Although they are very good to eat, in many places around the world they are used as an aquarium fish because of their beautiful coloration.

All content from Kiddle encyclopedia articles (including the article images and facts) can be freely used under Attribution-ShareAlike license, unless stated otherwise. Cite this article:
Scrawled cowfish Facts for Kids. Kiddle Encyclopedia.