Based on discovered skeletal material 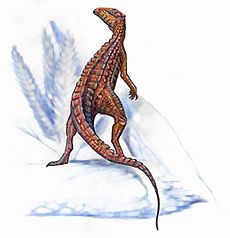 Scutellosaurus was a small bipedal herbivorous dinosaur from the Lower Jurassic period, 200–196 million years ago. It was about a metre long.

Its back was armoured, and it is placed in the Thyreophora with the other armoured dinosaurs. It was one of the earliest members of this group, and the most basal (primitive) form so far known. Its closest relatives may have been Emausaurus and Scelidosaurus. These, and the larger armoured dinosaurs Ankylosaurus, Stegosaurus and Huayangosaurus, were all quadrupedal. The lightly built bipedal Scutellosaurus is similar in form to the ancestral dinosaurs, which were bipedal.

Scutellosaurus was around 1.2 metres (3.9 ft) long, 50 centimetres (20 in) tall at the hips, and weighed 10 kilograms (22 lb). The fossil evidence includes two partial skeletons recovered from Arizona, although of the skull only the lower jaw has been recovered. There were also several hundred scutes running along its neck to its back and as far down as its tail. Some of these shields were flat, while others were pitted. It had an unusually long tail, possibly a counterbalance to the weight of the armoured body, and long arms that suggest it may have browsed on all fours.

All content from Kiddle encyclopedia articles (including the article images and facts) can be freely used under Attribution-ShareAlike license, unless stated otherwise. Cite this article:
Scutellosaurus Facts for Kids. Kiddle Encyclopedia.