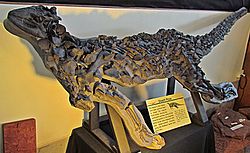 This is a cast of the only complete fossil specimen, which was found near Charmouth in Dorset

Scelidosaurus was a genus of thyreophorans, a lightly plated, herbivorous dinosaur about 4 metres long. It lived during the Lower Jurassic, 208 to 194 million years ago. Its fossils have been found in both England and in Arizona, in the United States.

Scelidosaurus has been called the earliest complete dinosaur. This and related genera have been found on three continents.

It is one of the earliest and most basal of the armoured dinosaurs. A review by Serano placed Scelidosaurus as the sister group (closest relative) to both the Stegosauria and Ankylosauria.

A full-grown Scelidosaurus was rather small, compared to most other dinosaurs. Some scientists have estimated a length of 4 metres (13 ft). Scelidosaurus was quadrupedal, with the hindlimbs considerably longer than the forelimbs. It may have reared up on its hind legs to browse on foliage from trees, but its forefeet were as large as its hind feet, indicating a mostly quadrupedal posture.

Scelidosaurus and its Jurassic relatives were herbivorous. However, while other ornithischians had teeth capable of grinding plant material, Scelidosaurus had smaller, less complex teeth and a jaw capable of only simple up-and-down jaw movements. In this aspect, they resembled the stegosaurids, which also bore primitive teeth and simple jaws. Also like stegosaurs, they may have swallowed gastroliths to aid processing of food (because of the lack of chewing ability), in the same manner used by modern birds and crocodiles. Their diet would have consisted of leaved plants or fruits, as grasses did not evolve until after Scelidosaurus had become extinct.

All content from Kiddle encyclopedia articles (including the article images and facts) can be freely used under Attribution-ShareAlike license, unless stated otherwise. Cite this article:
Scelidosaurus Facts for Kids. Kiddle Encyclopedia.