The Sea Cliff Bridge, together with the adjoining Lawrence Hargrave Drive Bridge, are two road bridges that carry the scenic Lawrence Hargrave Drive across the rockface on the Illawarra escarpment, located in the northern Illawarra region of New South Wales, Australia. The balanced cantilever and incremental launching girder bridges link the coastal villages of Coalcliff and Clifton and carry two lanes of traffic, and a pedestrian walkway. The Sea Cliff Bridge is one of only seven off-shore parallel-to-coast bridges in the world.

The Sea Cliff Bridge replaced a section of Lawrence Hargrave Drive that was permanently closed in August 2003 due to regular rock falls. A public outcry emerged over the road closure as Lawrence Hargrave Drive is the only road directly linking Coalcliff, Stanwell Park, Otford and Helensburgh to the northern suburbs of Wollongong.

The A$52 million 450-metre-long (1,476 ft) bridges brace against the Tasman Sea, up to 70 metres (230 ft) east of the original alignment of Lawrence Hargrave Drive. Completed in 2005, the Sea Cliff Bridge structure comprises a haunched box girder composed of prestressed concrete that was constructed using the balanced cantilever method, with five spans. Adjoining the Sea Cliff Bridge is the 210-metre-long (689 ft) Lawrence Hargrave Drive Bridge – often not considered as two separate bridges. This latter girder bridge that was constructed using the incremental launching method, with seven spans, ranging from 24 to 31 metres (79 to 102 ft), shares a common pier with the Sea Cliff Bridge.

The bridges were officially opened by the NSW Premier Morris Iemma on 11 December 2005, and were met with public approval and increased business for the area's tourism industry.

The bridges sit in a harsh marine environment as it directly faces the open ocean and is affected by high sea swell splashing. It is well attested that concrete structures in such environments are especially susceptible to chloride induced corrosion of the steel reinforcement, which can eventually lead to expensive repair works and significantly decrease the life of the structure.

An hour south of Sydney, the bridges have been a major tourist spot since they opened in 2005. The area adjacent to the bridges feature a scenic walkway surrounded by rocky cliffs that is a popular location for love padlocks.

The iconic bridges have drawn an increasing number of tourists in the late 2010s due to social media and bushwalking blogs online. Pioneer Walks published the route to the lookout and encouraged spectators to participate in an "unofficial walk with no safety precautions in place". On 30 September 2018, a 24-year-old man hiked to the “lookout" atop the cliff overlooking the bridges, where he sat down to take a rest. The ground he sat on was loose, and he slid 20 metres (70 ft) to the cliff’s edge, where he then plummeted 40 metres (130 ft) to his death. 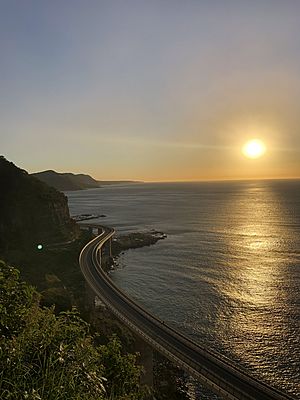 The Sea Cliff Bridge and adjoining Lawrence Hargrave Drive Bridge were featured in a range of media including:

All content from Kiddle encyclopedia articles (including the article images and facts) can be freely used under Attribution-ShareAlike license, unless stated otherwise. Cite this article:
Sea Cliff Bridge Facts for Kids. Kiddle Encyclopedia.