Kids Encyclopedia Facts
This page is about the New South Wales ski resort. For the mountain in Victoria, see Mount Selwyn (mountain). 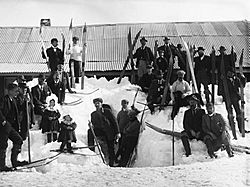 Selwyn traces its origins to nearby Kiandra, where skiing began in Australia in 1861. 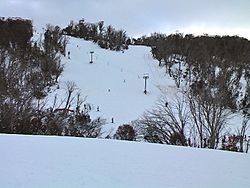 Selwyn Snow Resort is a ski resort located in the most northern part of the Snowy Mountains of New South Wales, Australia, in the Snowy Monaro Regional Council and Kosciuszko National Park. Selwyn Snowfields is located near the town of Adaminaby and is close to Cabramurra, which is the highest town in Australia.

Selwyn Snow Resort traces its origins to the skifields at nearby Kiandra, where skiing began in Australia around 1861. The more reliable snowcover at Selwyn saw the establishment of a portable rope tow on what is now the Township Run in 1966. The remaining ski facilities at Kiandra were finally transferred to Selwyn in 1978 (including Australia's first T-Bar, which had been installed at Kiandra in 1957). In 2009 a triple chairlift finally replaced the T-Bars on the Township Run at Selwyn Snow Resort. During the 2019-2020 bushfire season the Snowfields building and equipment was heavily impacted and damaged.

For the winter of 2009, Selwyn Snow Resort comprised 45 hectares (110 acres), with 11 lifts including chair lifts, pomas, t-bars, a platter and a rope tow (as well as one snow tube lift). The resort also advertises 45 kilometres (28 mi) of marked cross country trails. Selwyn is well suited to families and first timers, with 88% of terrain catering to beginners and intermediates, however the steeper gradient of the Racecourse Run provides some more challenging terrain for advanced skiers and boarders. In 2007 some terrain park features were added to the blue run known as Township.

A relatively low altitude means that the resort can have trouble maintaining a good natural snow cover during the very early and the latest stages of the ski season (June and September). The resort has developed extensive snowmaking facilities to combat this problem, and a state of the art Lenko System, with a virtually inexhaustible supply of water from nearby Three Mile Dam now services the resort. 35 hectares (86 acres) are today covered by snow-making and Selwyn Snow Resort is often the first New South Wales ski resort to advertise "100% access" to the mountain. Gentle, grassy terrain makes it easier for Selwyn Snow Resort to open its runs on a thinner snow cover than is the case at the higher, rockier resorts further south.

There is no public accommodation available at Selwyn Snow Resort. Winter access to the skifields is via the Snowy Mountains Highway, from Talbingo in the west or Adaminaby in the east. Limited guest accommodation is provided at nearby Cabramurra. The closest major tourist accommodation is at the holiday village of Providence Portal on the upper reaches of Lake Eucumbene between Adaminaby and Kiandra.

Wolgal Hut at Kiandra was re-opened in 2012 for public accommodation as part of the rejuvenation of Kiandra by NSW National Parks & Wildlife Service (NPWS). The ski and fishing hut was built in the 1960s and is located close to the foot of the original Kiandra ski slopes. It is one of the four remaining historic buildings of the abandoned gold rush town which have been the subject of restoration work.

In January 2020 bushfires in the region burnt through the resort, with pictures provided by the NSW National Parks and Wildlife Service showing widespread destruction. All of the resort's buildings were reportedly destroyed or severely damaged. However, as the resort had been previously evacuated no loss of life was reported.

All content from Kiddle encyclopedia articles (including the article images and facts) can be freely used under Attribution-ShareAlike license, unless stated otherwise. Cite this article:
Selwyn Snowfields Facts for Kids. Kiddle Encyclopedia.