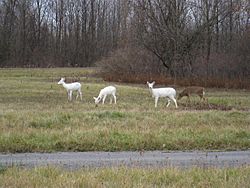 Seneca white deer inside the depot

The Seneca white deer are a rare herd of deer living within the confines of the former Seneca Army Depot in Seneca County, New York. When the 10,600-acre (43 km2) depot was created in 1941, a 24-mile (39 km) fence was erected around its perimeter, isolating a small herd of white-tailed deer, some of which had white coats. These deer are not albino, but instead carry a set of recessive genes for all-white coats. The isolation of the herd causes high levels of inbreeding.

In the 1950s, the depot commander forbade GIs from shooting any white deer. The deer population has since grown to about 700 head, approximately 300 of which are white, making it the largest herd of white deer in the world.

Future of the herd

Since the depot's closure, the future of the deer had been uncertain. The visibility of white deer makes them easy prey for hunters and natural enemies like coyotes, and such a herd would not survive in the wild. The depot land is New York's largest block of land available for development and some new uses have been found for it. A new maximum security state prison was built on the eastern rim and the former barracks on the northern tip was converted into housing for troubled teenagers. Plans to buy 4,700 acres (19 km2) of land to build an ethanol and biofuel electricity production center and to plant crops of willow trees and switch grass to be converted into fuel was proposed. In 2006, a business plan was submitted to the Seneca County Industrial Development Agency, owners of the depot property, to convert the land into a conservation park and Cold War museum, but the plan was denied.

In 2016, the 7,000-acre property was sold to local businessman Earl Martin of Seneca Iron Works for $900,000 and established as Deer Haven Park, LLC. An agreement was later made between Martin and Dennis Money, founder of Seneca White Deer, Inc., to lease part of the land and operate it as a conservation park for the white deer. After some renovations to the fencing as well as construction of a welcome center and museum, Seneca White Deer park officially opened for tours in November 2017. Tours ended December 29, 2019. Tours reopened on Saturday's on June 27, 2020 as self guided auto tours with the option to download an auto tour app.

All content from Kiddle encyclopedia articles (including the article images and facts) can be freely used under Attribution-ShareAlike license, unless stated otherwise. Cite this article:
Seneca white deer Facts for Kids. Kiddle Encyclopedia.