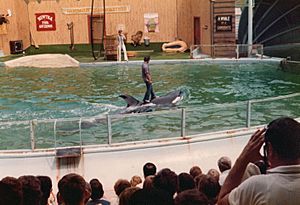 Newtka giving a ride during a show in the mid 1970s

The park opened on March 18, 1972. The 35-acre (14 ha) site was located in north Arlington off Interstate 30 near Six Flags Over Texas and adjacent to Arlington Stadium.

The city council of Arlington voted to close the park in 1976 because it did not generate enough revenue to both pay its operating expenses and pay off the bonded indebtedness.

The property is now the site of the Arlington Sheraton Hotel and has several buildings on the property that date back to the park. In addition, there is a remaining piece from the Japan garden, a very nice, large bridged Pagoda still exists outside the hotels court pool area.

All content from Kiddle encyclopedia articles (including the article images and facts) can be freely used under Attribution-ShareAlike license, unless stated otherwise. Cite this article:
Seven Seas Marine Life Park Facts for Kids. Kiddle Encyclopedia.