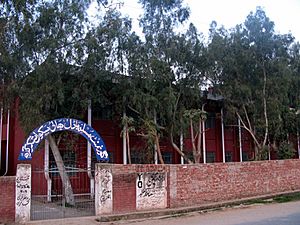 Shakargarh, the headquarters of Shakargarh Tehsil, is a city in the north-east of Pakistan in Narowal District of Punjab province. The city is at 32°16'0N 75°10'0E and is on the west bank of the Ravi River.

In old times Shakargarh was used as a route for the Mughals to enter Gurdaspur and going to Delhi. During British rule (before the independence of Pakistan), Shakargarh town became the capital of Shakargarh Tehsil.

In 1947 when the British were leaving, they divided British India between Pakistan and the modern republic of India. The border between the two countries was known as the Radcliffe Line (this was named after Cyril John Radcliffe who drew the borders). The line divided Shakargarh from the rest of Gurdaspur district (which then became part of India). Shakargarh then became part of Sialkot District, however when Narowal District was created in 1991, Shakargarh became part of that district.

All content from Kiddle encyclopedia articles (including the article images and facts) can be freely used under Attribution-ShareAlike license, unless stated otherwise. Cite this article:
Shakargarh Facts for Kids. Kiddle Encyclopedia.