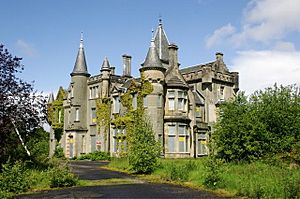 Shandon is a village 4 miles north-north west of Rhu on the Gare Loch in Argyll and Bute, Scotland.

Formerly in the county of Dunbartonshire, it developed alongside other similar settlements in the area from a hamlet to a fashionable residential area for wealthy Glasgow merchants.

West Shandon House, built in the 1840s by John Thomas Rochead for Robert Napier, often described as 'the father of clyde shipbuilding' was a prominent landmark and was renowned for housing Napier's extensive art collection. It later became a hydropathic institution, but was demolished in 1958.

Since the 1960s Shandon has been dominated by the Royal Naval base at Faslane, which occupies the whole of the former grounds of West Shandon House.

All content from Kiddle encyclopedia articles (including the article images and facts) can be freely used under Attribution-ShareAlike license, unless stated otherwise. Cite this article:
Shandon, Argyll Facts for Kids. Kiddle Encyclopedia.