Sheffield (formerly Malvern) is a small village located in the Selwyn District of the Canterbury region of New Zealand's South Island, near the Waimakariri Gorge. 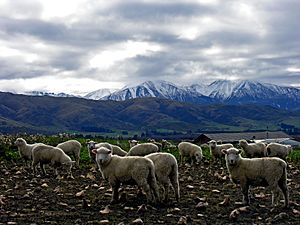 Rural scene near Sheffield, with the Southern Alps in the background

Sheffield has a close association with its neighbouring village Waddington, which is 1 kilometre (0.62 mi) further south-east along State Highway 73. The two villages share a community committee.

The two villages have a combined population of 444 according to the 2001 New Zealand Census of Population and Dwellings and are located between Darfield and Springfield on State Highway 73 and the Midland Line railway. The towns were settled in the 19th century by farmers attracted to the area for sheep grazing.

Sheffield has a railway station and was once a railway junction. The first railway line reached the town in the late 1870s from a junction in Darfield with the Whitecliffs Branch. This line, then known as the Malvern Branch line, grew to become the Midland Line between Christchurch and the West Coast. On 28 July 1884, the Oxford Branch was extended over the Waimakariri River to Sheffield, making the town a railway junction. Plans existed to continue this extension south from Sheffield as part of the proposed Canterbury Interior Main Line, but this never came to fruition and the rail link with Oxford closed on 14 July 1930.

All content from Kiddle encyclopedia articles (including the article images and facts) can be freely used under Attribution-ShareAlike license, unless stated otherwise. Cite this article:
Sheffield, New Zealand Facts for Kids. Kiddle Encyclopedia.