Shelby is a city in and the county seat of Toole County, Montana, United States. The population was 3,169 at the 2020 census.

Shelby has four distinct seasons, and is considered an arid climate. Long, severe winters give way to springlike weather anywhere from March to May. Summers can be extremely dry and hot, though it is not unusual to experience a snow flurry in July. The area is prone to heat lightning, hail, and severe thunderstorms during the summer months. Fall weather is often unpredictable, with snow falling during October some years, and temperatures well into the 80s stretching until the end of November on other years. Due to the city's location just off of the Rocky Mountain Front, wind is a constant. 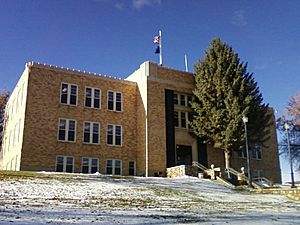 Shelby was named in honor of Peter O. Shelby, General Manager of the Montana Central Railway.

The most famous event in the town's history might be the Jack Dempsey vs. Tommy Gibbons boxing match. The event, and its relation to the town, is dealt with in the article about the fight. Recently the town hosted a dog camp named Camp Collie that made national news.

Shelby appears as the eastern terminus of the Marias Pass route available on Microsoft Train Simulator 1. 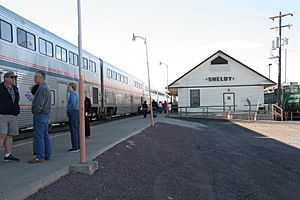 Amtrak, the national passenger rail system, provides daily service to Shelby (both east and west), operating its Empire Builder from Chicago to Seattle and Portland, Oregon.

Toole County Library is a public library in Shelby.

All content from Kiddle encyclopedia articles (including the article images and facts) can be freely used under Attribution-ShareAlike license, unless stated otherwise. Cite this article:
Shelby, Montana Facts for Kids. Kiddle Encyclopedia.