Carya laciniosa, the shellbark hickory, in the Juglandaceae or walnut family is also called shagbark hickory, bigleaf shagbark hickory, kingnut, big, bottom, thick, or western shellbark, attesting to some of its characteristics. It is a slow-growing, long-lived tree, hard to transplant because of its long taproot, and subject to insect damage. The nuts, largest of all hickory nuts, are sweet and edible. Wildlife and people harvest most of them; those remaining produce seedling trees readily. The wood is hard, heavy, strong, and very flexible, making it a favored wood for tool handles. A specimen tree has been reported in Missouri with 117 cm (46 in) diameter at breast height, 36.9 m (121 ft 1 in) tall, and a spread of 22.6 m (74 ft 2 in).

Shellbark hickory is widely distributed, but is nowhere common. The range extends from western New York through southern Michigan to southeast Iowa, south through eastern Kansas into northern Oklahoma, and eastward through Tennessee into Pennsylvania. This species is most prominent in the lower Ohio River region and south along the Mississippi River to central Arkansas. It is frequently found in the great river swamps of central Missouri and the Wabash River region in Indiana and Ohio. It's also found scattered in the Hudson valley in New York state

In part due to the activities of humans, shellbark hickory has become rare in its natural range. The heavy seeds do not travel far from the parent tree and many stands have been lost to forest clearing and lumber harvesting. It is also not planted much as an ornamental due to its slow growth and difficulty of transplanting.

Shellbark hickory grows best on deep, fertile, moist soils, most typical of the order Alfisols. It does not thrive in heavy clay soils, but grows well on heavy loams or silt loams. Shellbark hickory requires moister situations than do pignut, mockernut, or shagbark hickories (Carya glabra, C. alba, or C. ovata), although it is sometimes found on dry, sandy soils. Specific nutrient requirements are not known, but generally the hickories grow best on neutral or slightly alkaline soils.

The species is essentially a bottomland species and is often found on river terraces and second bottoms. Land subject to shallow inundations for a few weeks early in the growing season is favorable for shellbark. However, the tree will grow on a wide range of topographic and physiographic sites.

Shellbark hickory may be found in pure groups of several trees but is more frequent singly in association with other hardwoods. The species is a minor component of the forest cover types bur oak (Society of American Foresters type 42), pin oak–sweetgum (type 65), and swamp chestnut oak–cherrybark oak (type 91). It may also be found in one or more of the types in which hickories are included, but it is not identified at the species level.

Sapling and pole stages to maturity 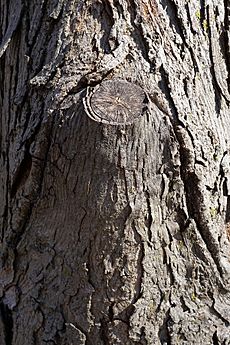 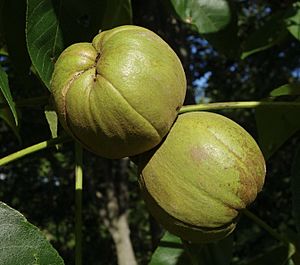 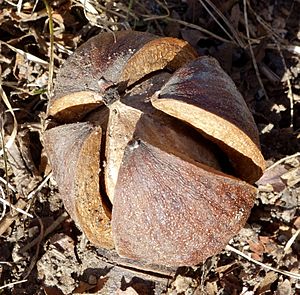 Growth and yield: The hickories as a group grow slowly in diameter, and shellbark hickory is no exception. Sapling size trees average 2 mm (3⁄32 in) per year in diameter growth, increasing to 3 mm (1⁄8 in) per year as poles and sawtimber. Second-growth trees show growth rates of 5 mm (3⁄16 in) per year. Shellbark hickory occasionally grows to a height of 40 m (130 ft) and a diameter of 100 centimetres (39 in).

Rooting habit: Shellbark hickory develops a large taproot that penetrates deeply into the soil. Lateral roots emerge at nearly right angles to the taproot, spreading horizontally through the soil. Major distinct lateral roots usually develop 12 inches or more below ground level and appear only after taproot is well formed. In Illinois, root growth was rapid in April, slowed during July and August, increased again in September, and ended in late November.

Mycorrhizal associations are formed when trees are young. The only specific fungus identified from shellbark hickory roots is an ectotrophic mycorrhiza, Laccaria ochropurpurea.

Reaction to competition: Shellbark hickory is very shade-tolerant, exceeded only by sugar maple (Acer saccharum) and beech (Fagus grandifolia). It grows slowly under a dense canopy, however. In stands with only partial shade, it reproduces well. It is a very strong competitor in most of the species associations in which it is found.

Under forest conditions, shellbark hickory often develops a clear bole for half its length and has a narrow, oblong crown. Open-grown trees have egg-shaped crowns. Heavy release sometimes results in epicormic branching.

Damaging agents: Although numerous insects and diseases affect hickories, shellbark hickory has no enemies that seriously threaten its development or perpetuation as a species. Seed production can be reduced significantly, however, through attack by several insects. Two of the most important are the pecan weevil (Curculio caryae) and the hickory shuckworm (Laspeyresia caryana).

The hickory bark beetle (Scolytus quadrispinosus) feeds in the cambium and seriously weakens or even kills some trees. Adults of the hickory spiral borer (Agrilus arcuatus torquatus) feed on leaves, but the larvae feed beneath the bark and can be very destructive to hickory seedlings. The flatheaded appletree borer (Chrysobothris femorata) likewise is a foliage-feeder as an adult, but its larvae feed on the phloem and outer sapwood.

The living-hickory borer (Goes pulcher) feeds in the trunks and branches of trees. A twig girdler (Oncideres cingulata) can seriously affect reproduction by killing back the tops of seedlings and sprouts. Both standing dead trees and freshly cut logs are highly susceptible to attacks by numerous species of wood borers.

A large number of insect species feed on hickory foliage. None of them causes serious problems for shellbark hickory, although they may be responsible for some stem deformity and growth loss.

Shellbark hickory is free of serious diseases, but it is a host species for a variety of fungi. More than 130 fungi have been identified from species of Carya. These include leaf disease, stem canker, wood rot, and root rot-causing fungi. Specific information for shellbark hickory is not available.

The seeds within shellbark hickory nuts are edible and consumed by ducks, quail, wild turkeys, squirrels, chipmunks, deer, foxes, raccoons, and white-footed mice. A few plantations of shellbark hickory have been established for nut production, but the nuts are difficult to crack, though the kernel is sweet. The wood is used for furniture, tool handles, sporting goods, veneer, fuelwood, charcoal, and drum sticks.

All content from Kiddle encyclopedia articles (including the article images and facts) can be freely used under Attribution-ShareAlike license, unless stated otherwise. Cite this article:
Shellbark hickory Facts for Kids. Kiddle Encyclopedia.