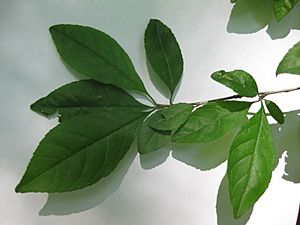 Distinguishing features of this species are crenate leaf margins and fruiting pedicels that are 2–8 mm long. Its "distinctive leaf shape... is less variable than other species of holly". Leaves are obovate, simple, alternating, deciduous, and grow to 2.5-7.5 cm long.

Drupe fruits are red (or rarely yellow), shiny, and globose (spherical, or nearly so), with a diameter of 4–8 mm. The pulp is bitter; they contain 3-5 seeds and mature in autumn.

Bark is "light brown to gray" in color and may be smooth or "warty and roughened". 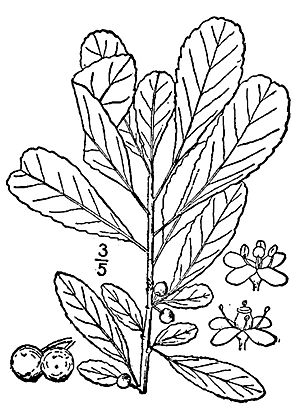 It grows in the northern Mexico states of Chihuahua and Coahuila.

It prefers land in floodplains and the margins of swamps or lakes, and grows at elevations up to about 360 m. Other plant species with which possumhaw is associated include water tupelo (Nyssa aquatica), overcup oak (Quercus lyrata), bald cypress (Taxodium distichum), sycamore (Platanus occidentalis) and hackberry (Celtis spp.). 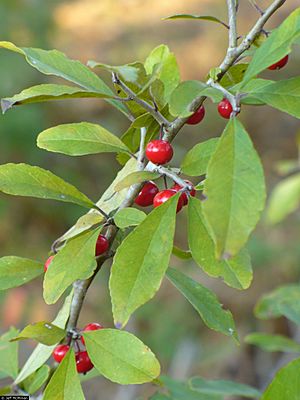 Because of the attractive "berries", the tree is used as a winter ornamental plant, and branches are collected for use as Christmas decorations. The wood is not useful commercially because of the tree's small size.

All content from Kiddle encyclopedia articles (including the article images and facts) can be freely used under Attribution-ShareAlike license, unless stated otherwise. Cite this article:
Ilex decidua Facts for Kids. Kiddle Encyclopedia.