The Shenandoah Valley Music Festival is a nonprofit organization.

Concerts take place in the pavilion of Shrine Mont, formerly the Orkney Springs Hotel, which is listed on the National Register of Historic Places and is now owned by the Episcopal Diocese of Virginia. 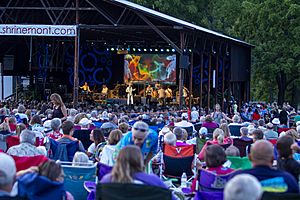 The Beach Boys performing at SVMF in 2019

In the early 1960s Helen M. Thompson, executive secretary of the American Symphony Orchestra League, and Col. Robert Benchoff, Headmaster of the Massanutten Military Academy, sought to bring symphonic music to Virginia's Shenandoah Valley. Under the artistic direction of conductor Dr. Richard Lert, they hosted the Shenandoah Valley Music Festival's first concert, held in the gymnasium of the Massanutten Military Academy in 1963. The Festival has since branched into hosting a multitude of genres including rock, country, bluegrass, folk, Americana, and pop.

All content from Kiddle encyclopedia articles (including the article images and facts) can be freely used under Attribution-ShareAlike license, unless stated otherwise. Cite this article:
Shenandoah Valley Music Festival Facts for Kids. Kiddle Encyclopedia.