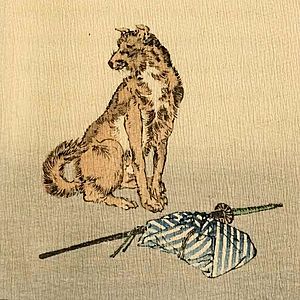 Translations include "Schippeitaro" in Andrew Lang's Violet Fairy Book (1901), taken from a German copy, and Mrs. James's "Schippeitaro" (1888), which share the same plotline: The mountain spirit and its minions (in the guise of cats in this version) demand a yearly human sacrifice of a maiden from the local village. A young warrior overhears the spirits hinting that their would-be bane was "Shippeitaro", which turns out to be a dog. This dog is substituted for the maiden to be placed inside the sacrificial container, and when the spirits arrive, the warrior and dog attack the cats and vanquish them.

The evil spirits appear as monkeys in most instances of the tale, as in the version of "Shippei Taro" given in Keigo Seki's anthology (translated into English 1963). In fact, this folktale is classified as "Destroying the Monkey Demon" (Sarugami taiji) tale type by Japanese folklorists.

In variants, the dog may have Suppeitarō, Suppetarō or a variety of other names, for example, "Hayatarō of Kōzenji temple in Shinano". The dog may not be given any name at all.

Monkey God tales preserved in the medieval anthologies Konjaku Monogatarishū and Uji Shūi Monogatari have been suggested as being the original sources of the orally disseminated versions.

The story of "Schippeitaro" (1888) as told by Mrs. T. H. James (Kate James), was number 17 in the "Japanese Fairy Tale Series" printed by Hasegawa Takejirō, who issued many such chirimen-bon or "crepe-paper books". Mrs. James's version follows a storyline identical to Lang's version.

Below is the summary of the Lang/Mrs. James version:

A young warrior wandered the land in search of adventure, eventually finding an enchanted forest, wherein he slept in a shrine (or chapel). He was awoken at midnight by ferocious yowls from cats, who were dancing and yelling, some saying, "Do not tell Shippeitaro!" He got up and continued on, eventually finding a village where he heard a female voice lamenting and pleading for help. He was told that every year they had to sacrifice a maiden to the spirit of the mountain, and it was this girl's turn this year. She was put in a cage (or cask) which, in turn, was placed in the shrine. He inquired about Shippeitaro: a dog of the prince's overseer, living nearby. The warrior visited the overseer and persuaded him to lend him the dog. He went to the cage, replacing the maiden with Shippeitaro. The cage was brought to the shrine, and the cats came. A huge black cat opened the cage, and Shippeitaro jumped out and killed it. Then, with the help of the warrior, killed several others before they fled. The warrior brought Shippeitaro back to his owner in the morning, and every year a feast was held in honor of the warrior and Shippeitaro.

The Lang/Mrs. James version which features cats as the antagonists is actually atypical. In most Shippeitaro tales, the malevolent spirits appear as monkeys (or baboons).

An example of "Shippei Taro" published in Keigo Seki (ed.), Robert J. Adams (tr.), Folktales of Japan (1963) had been collected in Monou District, Miyagi. The priest in the story defeated the ogres (whose remains were those of dead monkeys) by replacing the sacrificial maiden inside the chest with the dog Shippei Taro, found in the distant city of Nagahama, Ōmi Province.

Seki himself collected a number of variant tales from the field. When Seki published Nihon mukashibanashi taisei (1978), his provisional count reached 67 examples. This tally was inclusive, even counting tales where the dog helper did not appear at all.

The dog may or may not have a name at all. And the name is not entirely consistent. The dog's name may be only a slight variant of Shippeitaro, such as (Suppeitarō, Suppetarō (すっぺい太郎, 素平太郎, すっぺ太郎), or an alternate reading (Takeberatarō) or altogether different. The dog may be Shippeitarō/Suppe(i)tarō from Ōmi or Tanba or some other province. In several examples, the dog appears as Hayatarō (早太郎) or Heibōtarō (へいぼう太郎, 兵坊太郎) of Kōzenji [ja] temple in Shinano Province.

According to one scholar the name Shippeitarō tends to occur near Tōtomi Province (Shizuoka Prefecture), while Hayatarō is concentrated in Shinano Province (Nagano Prefecture). It has been observed that in Shinano dialect, haibō (ハイ坊) denoted "wolf cub", which probably gave rise to the name Heibōtarō, and Hayatarō may well be a further corruption of this.

The evil spirits may be in the form of monkey, cat, rat, badger or "raccoon dog" (mujina, tanuki). 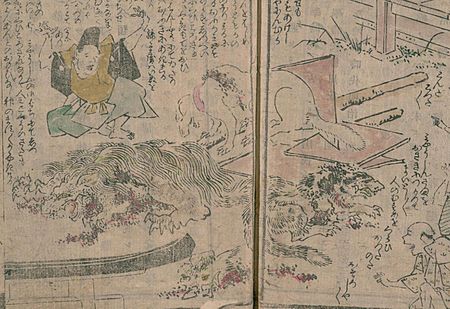 Shippeitaro breaks out of his box and destroys the wolves.
—from Zōho Shippeitarō (1796), printed from a drawing by Toyokuni.

There is also a kibyōshi type printed book from the Edo Period, the Zōho Shippeitarō (1796) meaning the "expanded version" that was written by Nansenshō Somahito (南杣笑そまひと) with illustrations by ukiyo-e artist Toyokuni. This book illustrates spirits of the monkey, fox, kappa, tanuki (raccoon dog), hare, and wolf kind devouring the human sacrifice, and in the culminating scene depicts Shippeitarō defeating wolves.

In the medieval anthology Konjaku Monogatarishū occurs a similar story of a sacrifice-demanding monkey god, entitled "How in Mimasaka Province a God was Trapped by a Hunter and Living Sacrifice Stopped". The Shippeitaro tales have been considered orally transmitted versions of this medieval prototype.

A similar tale is also included in another medieval anthology, the Uji Shūi Monogatari.

In Japanese folklore studies, the "Shippeitarō" story is classed under the tale type Sarugami taiji (猿神退治, "Destroying the Monkey Demon" or "Monkey Spirit Conquest"), categorized as Type 91 by Seki in his paper written in English. This general tale group is more broad, and includes tales where a dog is not involved at all. The tale group (Sarugami taiji) is assigned Seki No. 256 (NMBS = Nihon mukashibanashi shūsei II; NMBT=taisei.) in Japanese scholarship.

Since the story concludes with the heroes abolishing the practice of offering maidens as human sacrifice, it draws a parallel to the legend of Saint George and the Dragon, and there are certain similarities also to the story of Susanoo saving Kushinadahime from the great serpent Yamata no Orochi.

In the Aarne–Thompson classification, the tale is classed as "The Dragon Slayer" type, AT300.

All content from Kiddle encyclopedia articles (including the article images and facts) can be freely used under Attribution-ShareAlike license, unless stated otherwise. Cite this article:
Shippeitaro Facts for Kids. Kiddle Encyclopedia.