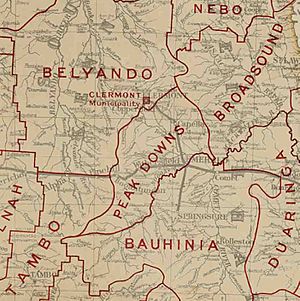 On 11 November 1879, the Belyando Division was established as one of 74 divisions around Queensland under the Divisional Boards Act 1879.

On 20 September 1884, Peak Downs Division was separated from the southern part of Belyando Division.

In 1927, the shire's offices were located in Capella.

The Shire of Peak Downs included the following settlements:

All content from Kiddle encyclopedia articles (including the article images and facts) can be freely used under Attribution-ShareAlike license, unless stated otherwise. Cite this article:
Shire of Peak Downs Facts for Kids. Kiddle Encyclopedia.