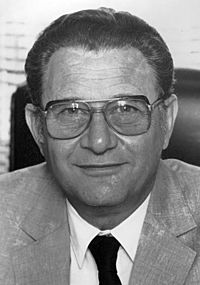 Shlomo Gazit (Hebrew: שלמה גזית; 1926 – 8 October 2020) was a Turkish-born Israeli military officer and academic. He was a Major General in the Israel Defense Forces. He was in charge of Israel's Military Intelligence Directorate. He later was President of Ben-Gurion University and head of the Jewish Agency. He was born in Istanbul.

All content from Kiddle encyclopedia articles (including the article images and facts) can be freely used under Attribution-ShareAlike license, unless stated otherwise. Cite this article:
Shlomo Gazit Facts for Kids. Kiddle Encyclopedia.