The shore plover (Thinornis novaeseelandiae), also known as the shore dotterel or by its Māori name of tuturuatu, is a small plover endemic to New Zealand. Once found all around the New Zealand coast, it is now restricted to a few offshore islands. It is one of the world's rarest shorebirds: the population is roughly 200.

Initially classified in the common plover genus Charadrius, the shore plover is currently placed in Thinornis along with one other species, the hooded plover (T. cucullatus). Thinornis rossii, supposedly from the Auckland Islands, is now generally considered to be a juvenile shore plover with an incorrectly recorded location. Some authorities consider the shore plover a species of Charadrius, and further genetic evidence will be needed to resolve the issue. 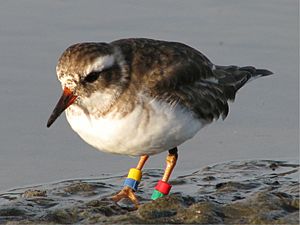 Thinornis novaeseelandiae is brown above and white below, with a black (male) or brown (female) mask. There is a distinctive white strip circling its head below its brown skullcap. Its legs and dark-tipped bill are orange, brighter in males.

Although this species was historically found only on the New Zealand coast, subfossil shore plover bones have been recovered from roosts of the extinct laughing owl near rivers many kilometres inland. Cook's second expedition collected them from opposite ends of the South Island, in Fiordland and the Marlborough Sounds. There are 19th century reports of shore plovers from the South Island and several parts of the North Island, but by the 1870s they had vanished from the mainland, surviving only on the Chatham Islands. Introduced predators such as feral cats and Norway rats were the main culprits. 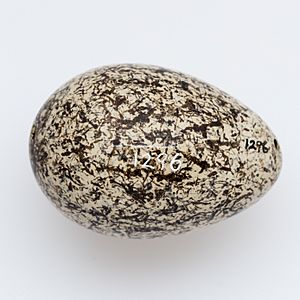 Shore plovers (unusually for shorebirds) nest under cover (such as driftwood and vegetation) or in burrows under boulders. This is likely to be for protection against avian predators – in their current range, skuas, and past predators would have included the laughing owl and the New Zealand falcon. This is one of the reasons for their decline, as such nests are more vulnerable to mammalian predators.

In the early 1990s, the Department of Conservation (DOC) started a captive breeding programme at Pukaha / Mount Bruce National Wildlife Centre, and later at Isaac Conservation and Wildlife Trust. From a captive population of around 6–10 pairs, over 400 captive-bred juveniles have been released into the wild.

DOC moved a number of captive-reared juveniles to Mana Island, off Wellington's western coast, between March and May 2007. They bred within months of their arrival, and in February 2008 twenty more were translocated. From a high of 87 individuals, the population was reduced to just 10 from the effects of a single Norway rat.

Birds had also been translocated since 2000 to Waikawa (Portland Island), a privately owned island off the Mahia Peninsula in Hawke's Bay. In 2012, the population on Waikawa was discovered to have crashed by 75% to just 20 birds, apparently due to predation by a Norway rat. Twelve eggs were rescued for translocation to Mana Island.

A total of 42 captive-bred shore plovers were released onto Motutapu Island in 2012 in the hope they would become established there and on other pest-free islands in the Hauraki Gulf. The birds repeatedly flew away, and only five were still present in 2015 when nineteen more were released. Motutapu had its mammalian pests removed in 2010, and the breeding population there increased from one pair in 2015 to three pairs in 2016. These birds are currently the most accessible to the public.

All content from Kiddle encyclopedia articles (including the article images and facts) can be freely used under Attribution-ShareAlike license, unless stated otherwise. Cite this article:
Shore plover Facts for Kids. Kiddle Encyclopedia.