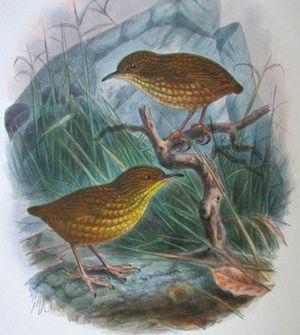 Lyall's wren became extinct within two years of the introduction of cats to Stephens Island.
(an illustration from Walter Lawry Buller's A History of the Birds of New Zealand, published in 1905)

Cats are a popular pet in New Zealand. Cat ownership is occasionally raised as a controversial conservation issue due to the predation of endangered species, such as birds and lizards, by feral cats.

The domestic cat (Felis catus) first arrived at New Zealand on Captain James Cook's ship HMS Endeavour in the mid-18th century, but were established by European settlers a century later. As of 2011[update], there are an estimated 1.419 million domestic cats in New Zealand, with almost half of all households owning at least one and an average of 1.8 cats per household.

Because of the effects of predation on New Zealand wildlife, domestic cat ownership is sometimes a contentious issue. Since the 1990s, cat-free subdivisions have occasionally been established to prevent predation occurring within nearby natural areas by domestic cats. In 1996 a cat-free subdivision was established at Waihi Beach, a landmark decision by the Western Bay of Plenty District Council. It was sought by Forest and Bird and the Department of Conservation to protect wildlife in a nearby salt marsh.

In 2012, the operators of the Zealandia wildlife sanctuary called for cat owners not to replace their pet when they die as a means of reducing the cat population. In 2013, Gareth Morgan, an economist and philanthropist, caused an international furore when he called for cats to be wiped out. He launched the "Cats To Go" website to support the stance. It is suggested that owners could euthanize their cats, but it is not seen as necessary. Some conservationists supported the stance taken by Morgan.

Even though cats control rodents which also prey on native wildlife and thus have a protective role, the precautionary principle is recommended in certain cases such as adjacent to natural areas and in outer suburbs of cities.

A study done on patients in Auckland with acute toxoplasmosis, an infectious disease carried by cats and transmitted to humans via cat faeces (as well as via other pathways), is now thought to be more debilitating than initially realised. The patients had a high rate of fatigue, headaches, and had a difficulty with concentration.

Apart from two species of bats, New Zealand did not have any land-based mammals until settlement by the Māori and by European people. As a consequence, birds and even insects took over the ecological niche normally filled by mammals. The introduced mammals, including cats, became invasive species that severely affected the native wildlife.

It is estimated that feral cats have been responsible for the extinction of six endemic bird species and over 70 localised subspecies, as well as depleting the populations of bird and lizard species. The extinction of Lyall's wren is a case of bird extinction due to predation by cats. The extinction of the birds is often blamed on the lighthouse keeper's cat alone, but cats had become established in 1894 when a single pregnant female landed on the island, so it is likely that it was a result of the whole cat population.

Cats are problematic on other islands as well. It was speculated that cats would have caused the extinction of the kakapo on Stewart Island / Rakiura, had the birds not been moved to other islands. The introduction of cats on to Mangere, Herekopare and Raoul Islands caused localised extinctions of bird species. After cats were eradicated from Little Barrier Island, the local bird populations increased and North Island saddlebacks were successfully reintroduced.

Feral cats are the principal threat to the critically endangered black stilt and as of February 2010[update] only 85 birds remain, largely in the Mackenzie Basin. After the illegal introduction of rabbit haemorrhagic disease (RCD) into New Zealand, rabbit numbers were reduced dramatically for a period of time. When the rabbit numbers in the Mackenzie Basin were low, feral cats switched from preying on rabbits to preying on native fauna, including the black stilt. A trapping programme for cats and other predators that threatened the black stilt population was instigated by the Department of Conservation.

The impact of feral cats on species other than birds is not as well documented although in 2010 the Department of Conservation discovered that a feral cat was responsible for killing over 100 endangered New Zealand short-tailed bats over a seven-day period in a forested area on the southern slope of Mount Ruapehu.

Since the late 1990s, big cat sightings (phantom cats) have been reported in widely separated parts of New Zealand, in both the North and South Islands. There have been several unverified panther sightings in Mid-Canterbury near Ashburton and in the nearby foothills of the Southern Alps, but searches conducted there in 2003 by the Ministry of Agriculture and Forestry found no corroborating physical evidence.

There are numerous cat welfare and cat breeding organisations in New Zealand. The Royal New Zealand Society for the Prevention of Cruelty to Animals was formed in 1882 and now has 47 branches around the country. Cats Unloved is a Christchurch-based organisation working with cats. In 2011 the organisation was criticised for euthanasing cats with chloroform, although it is done legally and is considered to be necessary to address the problem of stray cats, seen as a large problem in the city. The animal euthanasia is done on wild and diseased cats and those which were not housetrained. There are also a number of Cats Protection League groups in different parts of the country.

New Zealand Cat Fancy is a governing body for the many cat clubs around the country and CATZ Inc is a registry for New Zealand cats.

All content from Kiddle encyclopedia articles (including the article images and facts) can be freely used under Attribution-ShareAlike license, unless stated otherwise. Cite this article:
Cats in New Zealand Facts for Kids. Kiddle Encyclopedia.