Sidalcea malviflora is a species of flowering plant in the mallow family, known by the common names dwarf checkerbloom, Greek mallow, prairie mallow and dwarf checkermallow.

Sidalcea malviflora is native to the West Coast of the United States, from Washington to California, and into northwestern Baja California. It is a common plant of chaparral, coastal sage scrub, and other habitat types.

Sidalcea malviflora is somewhat variable in appearance and there are many subspecies. In general it is a perennial herb growing from a woody caudex and rhizome, its stem reaching about 60 centimeters in maximum height. It is sparsely to densely hairy in texture. The leaf blades are variable in shape, but are often divided deeply into several lobes. The inflorescence is a dense or loose array of several flowers. The flower has five petals in shades of bright to dark pink, often with white veining, and measuring one to over three centimeters in length. 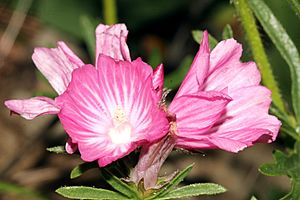 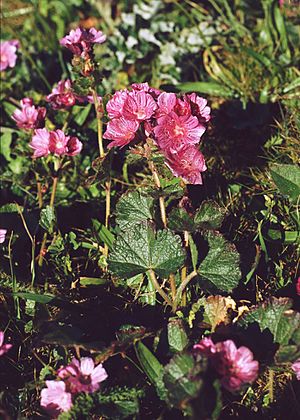 There are over ten subspecies, some of which are endemic and rare:. They include:

Sidalcea malviflora is cultivated as an ornamental plant, for use in traditional, native plant, water conserving, and wildlife gardens.

Cultivars have been selected for flower colors and size qualities, they include:

It is a larval host to the West Coast lady.

All content from Kiddle encyclopedia articles (including the article images and facts) can be freely used under Attribution-ShareAlike license, unless stated otherwise. Cite this article:
Sidalcea malviflora Facts for Kids. Kiddle Encyclopedia.