Sigaus childi is an endangered protected species of grasshopper known only from the Alexandra district of the South Island of New Zealand. It is one of just two species of grasshopper listed for protection under the New Zealand Wildlife Act 1953 (the other is Brachaspis robustus). It is currently classified asThis species is classified as "At Risk, Naturally Uncommon" by the Department of Conservation. The genus Sigaus is endemic to New Zealand. 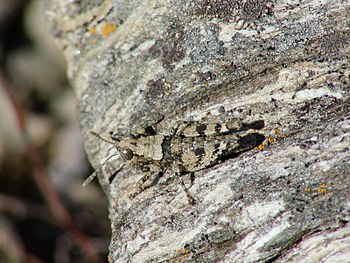 Sigaus childi is morphologically cryptic and polymorphic in colour, ranging from pale grey through earthy tones to green and black. Some individuals closely match foliose lichens that grow in rocks in the area, but others more closely resemble gravels or pebbles. They rely on camouflage rather than hopping to evade predators, and their hops are short: 30–40 cm and 15 cm high. 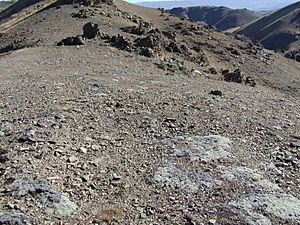 This species has a patchy distribution in a small area of about 200 square kilometres around the township of Alexandra, 200–500 m above sea level. Searches have been carried out on the northern end of the Knobby Range, North Rough Ridge, and the Rock and Pillar Range: all have failed to locate further populations. Sigaus childi is primarily found on dry, open, sparsely vegetated slopes, usually on north-facing hillsides, but rarely on modified farmland. Most of these sites appear rocky, mainly due to their low growing and sparse vegetation.

Another more widespread species, S. australis, that lives mostly in subalpine habitat in the mountain ranges nearby, also occurs in this lowland semi-arid habitat. This brings it into close contact and sympatry with S. childi at some locations. Genetic data indicate extensive gene flow between these two species.

Threats to S. childi include introduced predators such as cats, rodents, mustelids, and hedgehogs. They are also eaten by native skinks. Rabbits compete with them for food plants (sorrel, hare's-foot clover, viper's bugloss, and Raoulia). Sigaus grasshoppers evolved during Pleistocene glaciations and are adapted to arid open habitats, so they are threatened by landscape modification like irrigation. As at 2016 this species was classified as "At Risk, Naturally Uncommon" by the Department of Conservation.

All content from Kiddle encyclopedia articles (including the article images and facts) can be freely used under Attribution-ShareAlike license, unless stated otherwise. Cite this article:
Sigaus childi Facts for Kids. Kiddle Encyclopedia.